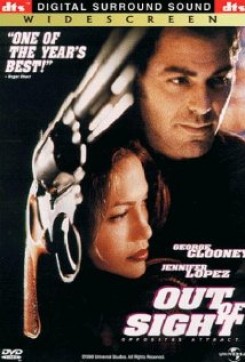 Out Of Sight is a film about Jack Foley, a bank robber, who escapes from prison with the intentions of robbing a rich tycoon he met while incarcerated. However, during the breakout, Jack encounters a female marshal and is forced to take her with him, which only complicates matters in the future.

There is a scene in the prison where Ripley, the rich tycoon, is making a deal with Maurice, a fellow inmate. Maurice is holding a bag with a few goldfish inside. He places the bag on the table while they talk. When Maurice is ready to leave, he picks up the bag and lets the water run out and into Ripley's hand. The fish are supposedly still in the bag and Maurice crushes his hand shut and then shoves the bag into Ripley's outstretched hand. This scene was shot in cuts. The fish are placed in the bag for the establishing shot and then the bag is replaced with one containing fake fish. Other animal action consists of a women holding a rabbit walking from A to B, two guards sitting on horses outside the prison gates, a large aquarium in Ripley's office and one in his home.