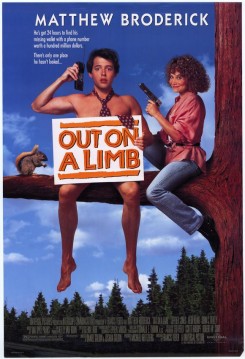 Out On a Limb

Out On A Limb is a hilarious comedy involving the wildest and wierdest cast of characters since Twin Peaks. Bill Campbell is a young and ambitious San Francisco financial broker. He's about to close a deal worth $140,000,000 and is given a piece of paper with the private phone number of the Mexican location where the legal paperwork will be signed a few days later. He slips the $140,000,000 phone number into his wallet. Shortly afterward, Bill receives a phone call from his kid sister, Marci, who pleads with him to come to Buzzsaw immediately to help with a family crises involving their mother and step-father. Confident he can resolve the crises quickly, he hops into his BMW and heads for Buzzsaw, a barren logging town in Northern California. Just before he reaches his destination, his car is stolen by Sally, a distraught young woman who is fleeing a very angry lover, whom she has jilted. Before taking the car, she forces Bill at gun point to undress, then abandons him naked alongside the highway. Sally not only has his car and clothes but his wallet with the all important phone number. Bill's desperate search for that illusive slip of paper unleashes a hilarious sequence of events involving murder, mistaken identity and romance.

The family dog, Dudley, is in a number of scenes. In one, Dudley eats some high blood pressure pills which he finds underneath the dining room table. What the dog actually ate was an empty capsule coated with edible flavoring. When a dresser drawer is pulled open a skunk is found sitting in the drawer. The dresser had a fake back which was open. The skunk was placed in the drawer just before the scene began. In a scene taking place in the woods surrounding Buzzsaw, a squirrel appears briefly on a log eating a nut as a drunk staggers up to the squirrel and talks to him. The squirrel is accustomed to people and just stayed on his mark eating the nut. While a couple are in the woods, they are unaware that a bear is behind them. When the bear stands up, they see him and run off, but the bear remains. The bear was responding to the food rewards and hand commands of his trainer. A cow standing in a field is seen briefly as atmosphere and fish in a tank-type aquarium are also seen briefly. Representatives of the American Humane Association were on the set during animal action which was filmed in both Northern and Southern California. In Northern California, AHA was represented by the Santa Cruz S.P.C.A