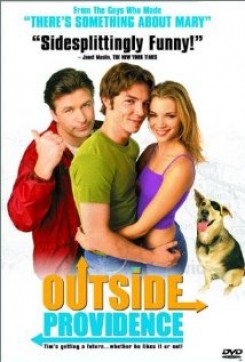 The screenplay for this film was written by the Farelly brothers who made There's Something About Mary. It is a coming of age teen comedy.

In this film there's something about a three legged, one-eyed dog. Sammy, aka Samatha, who plays the pet dog, Clops, in the film was actually the cherished pet of the Director's sister. As with many star animal actors, Sammy was a shelter rescue, adopted from the Coventry Animal Control Facilility in Rhode Island at the age of six weeks. Now five, Sammy is making her film debut. Two years ago, Samantha was chasing squirrels and caught her leg in a "V" formed by several tree branches. In her attempt to free herself, Sammy broke her leg badly. After two operations and consultations with three veterinarians, it was decided to amputate her right front leg. Sammy does well on three legs and according to her owner adapted quickly to her disability. She prepared for her role in Outside Providence by working with a professional trainer for several months to perfect her long downs, healing without a leash, and her response to voice and hand commands. Prior to her days on camera, Sammy was brought to the set to acclimate her to the sounds and smells of the movie business. By the time she was ready for her close-up, she was relaxed and very popular with the crew. To achieve the one-eyed effect, Sammy was prepped in pre-production to wear an eye patch and became very comfortable with it. The patch was made out of light gauze that was dyed black. The gauze fabric allowed Sammy to have some visibility through the patch. There were three bands made of elastic to hold it in place. The Director and his family are quite devoted to Sammy and prove that nepotism is alive and well in the movie business.