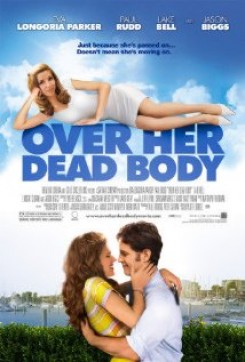 Over Her Dead Body

Henry's (Paul Rudd) bride is killed in a freak accident on their wedding day. When he eventually starts dating a psychic, the ghost of his dead fiancée decides to mess with the psychic, using pranks and gimmicks to try to stop her from dating her former beau.

A Labrador retriever on a leash sits while the owner and the veterinarian discuss how overweight the dog is. Two men are then seen in the background clumsily trying to lift and carry the Lab. The men even appear to drop the dog. For this, two actors coordinated lifting a large yellow Lab named Roxy. Their movements were choreographed to look awkward and make the dog appear cumbersome and heavy. The actors only appeared to struggle with Roxy; in actuality, they could handle her just fine, and she was wagging her tail in enjoyment the entire time. The actors were introduced to the dog and instructed on her proper handling before filming began, and trainers stood nearby. As one man appears to be hoisting her by her waist, she moans. This was a sound effect added in later.

A girl pets a dog on the couch of the veterinarian's waiting room. A well-prepared, well-behaved dog was used for this scene. The dog and actress were comfortable with the mild action. The trainer stood just off-camera, cuing the dog to stay and using squeaky toys to get the dog to look in certain directions.

A parrot sits in its cage next to Henry (Rudd) in the back seat of a taxi. For this scene, the cage was secured with sandbags so that it would not tip, and the car was driving slowly. The trainer cued the bird to "speak."

Birds are seen near the water. These birds were filmed naturally in their own habitat.

Henry's sister is in the veterinarian's office with a cat. She holds the cat while her brother examines him. For this, the trainer placed the cat on the actress' lap right before filming and retrieved him immediately after. When the actress "drops" the cat, the action was mild and the distance to the ground was not far. The trainer standing just off-camera then cued the cat to stay. Reverse camera angles were used for effect.

Due to limited resources or scheduling conflicts, American Humane did not monitor some of the parrot action or some of the animals in the veterinarian's office.