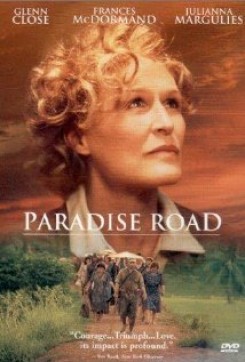 Paradise Road is a World War II drama based on the true story,about a group of extrodinary women who were imprisoned by the Japanese and forced to work in labor camps. In order to deal with the day to day trauma, the women formed a vocal orchestra that kept the group together until the end of the war.

There is a scene where a dog and his owner are seen on a ship. The ship is sinking and the woman is seen holding the dog moments before she jumps into the water. Later, the dog is seen being held by one of the women while floating in the water. This scene was shot in cuts. The dog is seen in the woman's arms just before she jumps. A fake dog was used for the shot of the woman jumping from the boat and into the water. In another scene, the dog is standing in the street and then a man is seen pointing a gun at the dog. Then an explosion is heard and the dog is seen running in circles as if he had been hit. Later, one of the women is seen stitching the dog's wound he supposedly received from the shot. This scene was shot in cuts. All sounds made by the dog and the gun were inserted during post production. Other animal action consists of the dog seen throughout the film being held or carried by the women or walking A to B. There is also a parrot seen in a cage in the quarters of one of the Japanese officers. The women discover a group of snails on the ground and begin to remove them from their shells, eating them. Paradise Road was filmed in Penang, Malaysia. American Humane was not present to monitor the animal action.