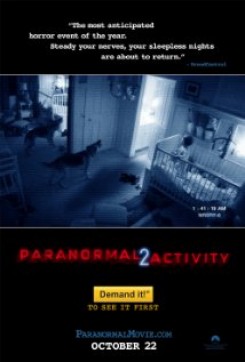 An average California family with a newborn suddenly experiences oddities in their house, leading them to find disturbing images on their security camera tapes.

Throughout the film, the family has a pet dog, which is seen performing such mild action as sitting, lying, being held, eating from a dog dish and walking around the house. For all of these scenes, trainers used hand signals and verbal commands to cue the mild action, which the trained dog was accustomed to performing. The dog's barking and growling was also a trained behavior. For shots in which the dog paws at a pool cleaning device, trainers placed a treat in the water near the device to get the dog to paw at it. The dog was rewarded with a fresh treat right after. The dog was also an avid swimmer, so they let it swim between takes as a reward, while trainers stood nearby. All grounds were inspected for hazards and sets were closed and secured. Cast and crew members were introduced to the animal and instructed on its proper handling.

In one scene, the dog's hindquarters are seen in the background while the dog barks at something off-screen. Then the dog is dragged across the carpet and out of frame. A trainer stood just behind a wall, near the front of the dog, and played tug of war with the dog, using its favorite rag. At the end of the scene, the trainer gently pulled the well-rehearsed dog's front end across the carpet a short distance. The dog's yelp was added in post-production. For the shot in which the man carries the dog out, the rehearsed actor simply held the trained dog.