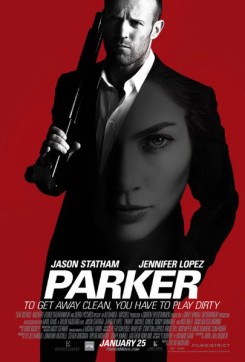 A Robin Hood-like thief works with a strict code of ethics.

One probably doesn’t expect to see a lot of animals in a testosterone filled film with vengeance against villains, starring Jason Statham. However, we do come across some animals in the new action flick Parker, and The American Humane Association was there to make sure Jason played nice with the critters.

In the scene where horses and riders stand side by side and the horses in a corral are being ridden, all horseback riders were stunt riders or experienced actors who were skilled at riding, mounting and dismounting.
In the scene where the actress is holding a puppy and tries to hand it to another actress, but ends up walking away with the dog instead, puppy was introduced to actors beforehand to get acquainted with them. Trainers were just off-camera to make sure the puppy was on mark. Also, when the dog comes into the room and barks at the actress, trainers were just off-camera cuing the dog to bark.

Due to late notification and/or limited resources, American Humane Association did not monitor any the scenes having to do with piglets coming out of racing lanes, the dog walking into kitchen tracking fake blood on his paws or when actor holds dog while sitting down.