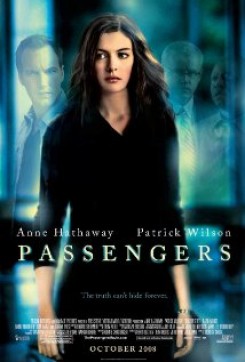 Claire (Anne Hathaway) is a therapist assigned to counsel the survivors of an airplane crash. She becomes suspicious of the accident as she learns more about the crash from her patients.

Passengers is a Screen Actors Guild (SAG) production; therefore, it was required to provide American Humane's Certified Animal Safety Representatives™ on-set access whenever animals were used. However, due to late notification, American Humane's Film & Television Unit was unable to directly supervise all scenes in which animals appeared. Columbia Pictures did provide a pre-release screening of the film, but since American Humane could not witness all of the animal action firsthand, the film has received a Not Monitored rating.

An American Humane representative did monitor one brief scene that was cut from the theatrical release but may appear in the DVD release. In that scene, Eric (Patrick Wilson) is standing on the railroad tracks after a train passes and a dog is sitting next to him. A trainer placed the dog on its mark after the train was gone, cued it to stay and retrieved it after filming.