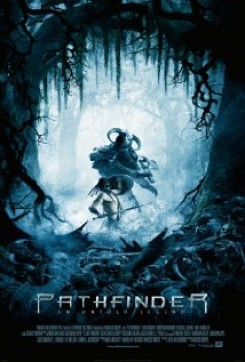 In this re-imagining of a 1987 Oscar-nominated Norwegian film, Pathfinder tells the story of a young Viking boy abandoned by his people during an early raid on the shores of North America, nearly 500 years before the arrival of Columbus. The poor, frightened child is adopted by a tribe of American Indians that his kinsmen attempted to destroy. At 25, the blond tribesman known as Ghost (Karl Urban) must intervene to protect his people when Viking warriors return to commit barbarous attacks that leave nothing but death and destruction in their wake.

The Vikings ride through a shallow creek and are next seen massacring the inhabitants of Ghost's (Karl Urban) village. For this sequence, the Safety Rep requested that all large rocks in the horses' path be removed to prevent any accidents with their footing. Only experienced stunt riders were used, and their barbaric weaponry consisted of fake plastic swords and foam spiked balls on plastic chains attached to one-foot sticks. The Viking costumes were made of lightweight materials that did not physically tax the horses, and all horses were acclimated to the special face plates they wore throughout the film. Mounted riders maintained a safe distance from the controlled, propane-fueled fire pits and propane bars used for structural burns.

Ghost rides through a snowy path and canters straight at a Viking riding toward him. When the riders collide, both horses fall to the ground. Ghost then reaches over his adversary's steed to stab the man. The filmmaker cheated the camera angle in this intense scene to make it look like the two horses crashed together. In reality, each rider merely leaned off to one side so only their shoulders bumped into each other and then they slid out of their special "falling saddles." Experienced stunt riders standing in for the actors carried their balsa wood and plastic swords above the horses' heads. Production prepared and loosened the ground for the stunt, and the well-trained falling horses were not asked to stay on the ground very long. All wranglers from the production were on hand during this scene. Horses were brushed and examined after each take.

In another falling scene, Ghost ambushes one of the Vikings by jumping on the man and knocking both horse and rider to the ground. Again, production prepared the ground by digging out a shallow area and filling it with mud to soften the landing. All cables were covered or removed, and the stunt rider had a falling saddle underneath a fake hide. A pick-up rider was just off-camera as a safety precaution, and the horse naturally held her head up so she wouldn't get mud on her face. On cut, the horse got up quickly and walked over to an awaiting handler.

In a mounted sword fight between Ghost and a Viking, the riders approach each other and Ghost throws his weapon, impaling his opponent and knocking him off his horse. Ghost's horse rears and they retreat while the Viking trackers fire arrows at their backs. Wranglers standing in for the actors traveled about 30 feet toward each other swinging plastic swords as they passed. The wrangler portraying Ghost pretended to throw his sword and the other rider fell off his horse in response. Both the impaling sword and the arrows were computer-generated (CGI).

As Pathfinder's (Russell Means) tribe hides in a cave, a bear appears and they swing at it with their spears. The bear swipes at a man with its paw, flinging him against the cave wall. In the distance, Pathfinder distracts the bear, crouches when the animal lunges for him, then thrusts upward with his spear, killing the bear. This sequence, pieced together from many separate shots, required a mixture of special effects and live animal action. Production built a cave set on a soundstage with fake rocks and limestone gravel flooring. Trainers prepared two grizzly bears to perform basic behaviors, such as going to a mark or sitting and standing up, and also rehearsed these behaviors with a cue.

Trainers played with the bears using a 12-foot tree pole, touching one bear at a time on the shoulder and telling the bear to "get it"; the bears stayed on mark and swatted at the pole with their paws. One trainer in an Indian costume was filmed using a prop spear made of balsa wood with a rubber tip to encourage a swatting motion from the bear. For the run toward Pathfinder, trainers tied a lure to a line on an electric winch. On cue, a trainer told the bear to "get it" and the bear ran after the lure as it was pulled toward the camera. A green screen and special effects were used for the shot of the bear looming over Pathfinder and being speared to death.

In one scene, the Indians inadvertently fall into a trap in the ground. The ill-timed release of the trap door impales a horse and sends the rest of the approaching Indians into a pit. Although a real horse was filmed approaching the pit, the horse that was impaled was actually a rubber prop horse on a cable. The pit was really a natural depression in the ground with large foam rocks around it. The live horse cantered up and pushed through a gate at the end mark, which was made of foam and covered with moss. Trainers scored the foam so that it would break away easily. The Safety Rep reported that when they were done filming, all horses were happy and without a mark on them. CGI arrows were added in later.

The Vikings torture Pathfinder by stringing him up to a tree, with ropes connecting his limbs to four horses. Production built an elaborate pulley system for this scene; the horses never pulled anything but a wrangler's hand at the other end of the rope to give some illusion of tension on the line. The stuntman in the tree was pulled up by crew members — not the animals. The actor swinging a whip did not come in contact with the horses, which were calm despite the hectic nature of the scene.

When the Vikings attempt to cross a frozen lake, the ice starts to break and several men fall in. Some horses are seen near the lake's edge and one mounted rider comes up from the water. This scene was filmed on an interior set with a wave tank and involved extensive use of green screen technology. Safety divers were in the water during rehearsals and filming, and the horses walked on a rubber-coated ramp to enter and exit the tank. Most of the horses were walked to the set and simply put into position near the Viking warriors at the lake's edge. For the shot of one Viking emerging from the lake, a stunt rider rode his horse down into the water, turned around at the bottom, and ascended on cue.