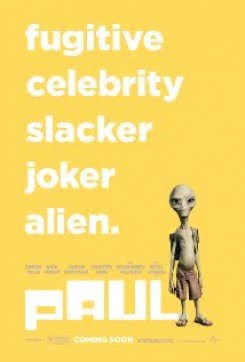 Two British comic-book geeks traveling across the U.S. encounter an alien outside Area 51.

A dog puts its front paws up on a table where a radio is playing, then runs to the door and scratches on it. A young girl opens the door for the dog, and it runs out into yard. The dog stares off at a spaceship and its eyes glow red. This scene was filmed in separate shots. The cast and crew were introduced to the dog and instructed on the handling before filming began. All grounds were checked ahead of time to make sure it was safe for the dog. A trainer placed a treat in front of the radio on the table and cued the dog to run to it and jump up. Then the dog was cued to run to the door and out onto the porch, where another trainer was waiting with a treat. The dog was then cued to run into the yard and stop and stare. The red eyes were added by a computer. Bird Action An alien brings a dead bird back to life and then eats it. This scene was filmed in front of a green screen. A fake prop bird was used for the dead bird and when the alien appears to eat it. The trainer held a live bird and slowly lifted it towards his mouth. This footage was edited together with the footage of the alien to make it appear as if the bird was eaten. Production provided documentation on the dead bird and animal heads that hang on the wall in a couple scenes.