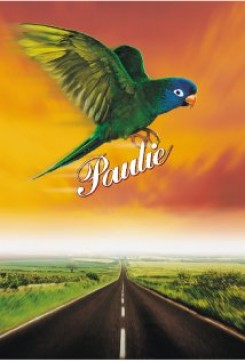 Paulie is a comedy about the funny and touching adventures of a very verbal parrot named Paulie, who can peak, not mimic, but actually converse. When Paulie is separated from the little girl who raised him, he sets out on a quest to find her – his best friend and first love. Along the way, he encounters people with whom he bonds and some he would just as soon avoid. The tale is told through the eyes of Paulie and in his own words

Can parrots really talk, or can they just mimic?

Some can and do! In fact studies have shown that they have the intellectual and emotional development of a three to five year old.

Was there only one Paulie?

Actually, fourteen Blue-crown Conures were used to play Paulie. Each was trained to understand over 50 verbal commands, plus hand signals. Some of the additional "bird characters" were played by others in the Conure family including the bright orange South American Nandays, black and green Jendays and Cherryheaded Conures.

What is the life span of a parrot?

Parrots take a great deal of care and commitment to own, since they can live to be 60 or even 70 years old. It could be like having a toddler around for a lifetime.

Paulie is a comedy about the adventures of a remarkably verbal parrot, Paulie, and his quest to find the little girl, Marie, who was once his best friend. Along the way, he encounters people with whom he bonds and some he would just as soon avoid.

Throughout the movie, Paulie and some of his parrot friends are seen doing many behaviors. For the film, fourteen Blue-crown Conures were trained using verbal, buzzer, whistle and visual commands with food rewards. The birds learned actions that included flying to designated spots, holding and carrying various props, giving looks, fluttering their wings, pecking at objects, shaking hands and even appearing to dance. Multiple trainers were on set to cue the birds and the parrots were used in rotation to do the specific behaviors for which each was prepared. The birds were divided into two groups for training, flyers and non-flyers, and alternated so that there was no chance of tiring any one bird. The technique of split screen was used in many instances as well as animatronic birds for some of the scenes.

As Paulie's tale unfolds, we see him as a baby bird being raised by a little girl named Marie. Their special friendship is cut short by an accident for which Paulie is blamed, convincing the family to give him away. Paulie then begins his quest to search for Marie, longing to be reunited. A real baby bird was used for the scene in which Paulie arrives as a gift for Marie. Trainers placed the bird in the basket and prepared the actress to lift it gently. The adult Paulie was always positioned by trainers and given verbal, buzzer or whistle commands to do things such as eat from a spoon and perch on many objects as well as Marie's finger and shoulder. The bird was given seed or nut rewards.

For the scene where Paulie is seen being pushed in a tire swing by Marie and ultimately falling to the ground, the sequence was filmed in many cuts. The bird was trained to sit in the swing and when he appears to fall to the ground the trainer actually dropped the bird gently from his hands from a height of approximately two feet. Paulie is also seen swinging vigorously and then flying off of the swing. For this sequence, two birds were used. One was conditioned to the swing and the second was conditioned to fly off the swing on cue.

Marie's dad brings home a cat to interfere with the close relationship between the girl and her chatty parrot. As expected, the cat chases the bird. For the chase sequence, although the bird and cat were trained together and had no fear of one another, much of the action was filmed separately and in many cuts, using an animatronic bird double in some instances. The cat ran in response to verbal cues and food rewards. For part of the scene, filming was accomplished by placing food on the moving camera that was eagerly chased by the cat. The cat "snarling" was done by waving a toy just out of each, while a lightweight monofilament tie down, (to which the animal was accustomed), secured the cat. This was in no way stressful to the cat which was later rewarded with treats and the toy. The appearance of the bird fluttering in distress was accomplished by cueing the bird to trained behavior and giving him food rewards. The bird was not actually in a frightened state.

When the cat jumps onto the coat rack and knocks it over with Paulie perched on top, the scene was filmed in many cuts. An animatronic bird was used on top of the rack and prop clothing covered a specially built device for the cat to hold onto. Trainers controlled the rocking of the coat rack while other trainers spotted the animal and held the cat from below, just out of camera range. The cat appears trapped under a salad bowl that flips over, but it is actually a fake cat's tail. At one point, the cat slides across the floor on a rug. For this scene, the cat was secured by the lightweight tie down to a rolling board underneath the rug.

The cat was prepared in pre-production to ride this mechanism. When the cat's paw finally comes down on Paulie's tail both bluescreen and fake tail feathers were used. The trainer was able to gently play with the bird's tail while it was filmed against a blue screen and later the hand of the trainer was replaced in post-production by a cat's paw. The cat worked with fake tail feathers.

Paulie ends up being adopted by a pawn shop dealer and finds his way into the life of Ivy, an elderly painter. Paulie wants to be set free and Ivy obliges him, setting him free on a busy city sidewalk where he is nearly trampled and hit by a snowball. For this scene, the bird was cued to leave his cage by the trainer who walked alongside the bird during filming. Foot traffic was done in a controlled pattern and the snowball was actually a light prop and never was allowed to fall near the bird. The snow was fake.

Paulie chooses life with Ivy who promises to help him find Marie. They set off together in her Winnebago to cross the country in search of his friend. Paulie's actions in the Winnebago, walking on the dash board or up and down the stairs, were accomplished with verbal commands and seed rewards. The Paulie seen singing on the perch is an animatronic bird. The bird's flight over the Grand Canyon was filmed on location and several birds were used in rotation and trained for free flight. The birds responded to verbal and whistle commands and the number of flights was limited.

For some of the other scenes where the bird is seen in flight, a customized wind tunnel was created specifically for the film. The birds were trained to fly and hover in the wind current that was created, enabling them to be filmed against a blue screen. Later, they could be placed in any location in the film. The fan could be set at a variety of speeds that compensated for the different weight and flight styles of each of the birds used. In this way, the camera was able to focus on the faces of the birds in flight and create a controlled atmosphere in which the birds could work safely.

Landing in California, Paulie bonds with the owner of a taco stand, Ignacio. Paulie becomes part of Ignacio's popular dancing bird act and even falls in love with another parrot named Lupe. The scenes where Paulie and the Mexican trio are seen dancing in unison and singing along with Ignacio were filmed using many cuts and a split screen technique. Trainers were able to work the four birds simultaneously and cued the behaviors that gave the appearance that the birds were dancing and singing. The learned behaviors included raising their heads, lifting their feet, moving forwardsbackwards, and in circles, bobbing their heads and opening their mouths as if singing. The parrots were rewarded with seed and nut treats. The birds were not only filmed together, but also filmed separately using the split screen technique that is edited in post production to make it appear as if the birds are in the same frame.

Benny, a petty crook, spies the talented Paulie and kidnaps the bird to put him to work as an accomplice in crime. Paulie learns to scam ATM machines and become a jewel thief. The bird was trained to put the ATM card into a fake machine and to retrieve money from the hands of unsuspecting patrons. The trainer rewarded the bird with seed after each card was successfully pushed into the slot and after each retrieval and return with the money. When Paulie is seen flying down a chimney and stealing from a jewelry box in the victims' bedroom, both a real and fake bird was used. The bird was trained to fly down a prop chimney from trainer A to a waiting trainer at point B. Turning the key in the jewelry box and pulling out the necklace were learned behaviors that trainers cued verbally and rewarded with food. At one point, it appears as if Paulie is stuck when the lid of the box slams down on him. For this scene, a fake bird was used. When Paulie is seen riding in the convertible with Benny, a trainer was positioned in the back seat of the car and the vehicle moved slowly.

His life of crime is cut short and Paulie finds himself the subject of intelligence testing at a research lab. Paulie befriends a janitor, Misha, who is a Russian immigrant and finds Paulie in the basement where the bird has been exiled for bad behavior. Paulie recounts his tale to Misha who promises to help the remarkable bird find his Marie. Scenes in the lab include Paulie getting his wings clipped, flipping through a card file, biting his captors and helping the other lab animals to finally escape.

For the sequence where Paulie gets his wings clipped, both a real and animatronic bird was used. The scene was shot in cuts and the close up of the wings being clipped was done using fake wings. Flipping through the card file and biting at the researchers was learned behavior. For some of the filming, trainers dressed as the lab technicians and the bird's biting was actually play behavior. During the lab scenes, both live and fake animals were used. Professional trainers and handlers placed all the live animals in their cages. Among the live animals were two chimps, eleven dogs, four lizards, twenty-five pigeons, a snake, fifty-five mice, twenty rabbits, twenty rats, and fifteen guinea pigs. Taxidermy animals included guinea pigs, muskrats, ferrets, and a raccoon. Stuffed and plastic toy animals were also used. When the animals are released, the scene was shot in cuts and the animals were placed on mark by the trainers and some were released on cue. The animals moved from trainer A at the release point to a waiting trainer at point B. The pigeons seen flying through the lab were released by trainers and trained to fly to a second waiting trainer.

American Humane Association was on set to monitor the animal action.