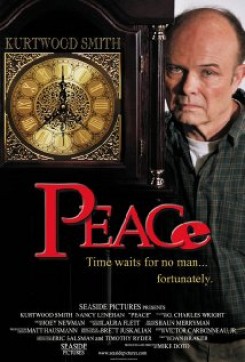 Howard (Kurtwood Smith) and Betty (Nancy Lenehan) have survived 40 years of marriage, but the constant companionship that follows Howard's retirement may spell the end of their matrimonial bliss.

Betty and Howard's dog Pumpkin appears throughout this short film wearing a variety of fetching fashions: a bathrobe, sailor suit, rain slicker, and party hat. The terrier, played by a veteran animal actor named Rug Rat, felt extremely comfortable wearing these outfits as they were actually from his personal wardrobe. To avoid overheating in the rain slicker, the trainer removed the coat between takes and allowed the dog long breaks.

The trainer encouraged Rug Rat to wander about or sit with the actors by planting strategically placed treats on the set and letting the dog ferret them out at his own pace. For the kitchen scene where Betty accidentally drops a small frying pan, trainers made sure the dog was not too close when it hit the floor. The aging animal actor is actually deaf and therefore did not seem perturbed by the clanging sound.

To get Pumpkin to nuzzle Howard as he lies in the hallway, the trainer placed a piece of meat under the actor's leg that Rug Rat headed straight for upon action.

American Humane's Certified Animal Safety Representative on this production reminded the crew frequently to be aware of the dog underfoot, and both the first assistant director and the director were well aware of Rug Rat's hearing impairment. The steak Pumpkin licks in one shot was left whole to eliminate the possibility of him choking on smaller pieces.