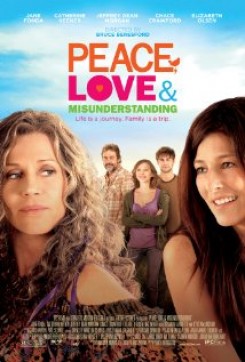 A lawyer tries to distract herself from her pending divorce by taking her two children to meet their eccentric grandmother.

When Diane (Catherine Keener) and her two children arrive at her mother’s farm in Upstate New York, the animals roaming the area as they arrive is meant to convey her mother’s eccentric, free-spirited personality. Most of these animals were chickens seen milling about. The chickens were basically allowed to graze at liberty. An off-screen trainer scattered feed on the ground so the chickens would peck at it and stay on their mark. Whenever chickens were seen sitting on a kitchen counter or on a desk, they were placed there by a trainer and the actors were prepped on how to handle them properly if they needed to be picked up. Trainers stood just off camera to retrieve the chickens after filming took place.

The dogs being walked by a woman in the background during the protest scene were merely caught on film with their real owners and were not manipulated in any way.

In a scene where the family hits a deer on the road, production provided the proper documentation to prove that the deer lying on the ground was fake. The taxidermy deer was laid on the ground with fishing line tied to one leg while trainers off-screen pulled the line and made the leg move to give the appearance that it was still alive after the accident. Production also provided proper documentation for the fake pig head at the meat shop.

The eagle and squirrel were all photographed on location by production.