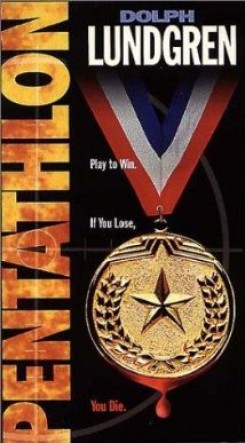 Pentathlon is the action-packed story of how an Olympic Pentathlon gold medalist defects from East Germany after the 1988 Olympics in Seoul. Eric, after having won the gold medal for East Germany, defects to the U.S. He is wounded during his escape and is further punished when the East German Secret Police murder his father, still residing in Germany. Soon there after, the Berlin wall comes down and Eric has a complete mental and physical breakdown, believing that if he would have waited, instead of defecting, his father would still be alive. Eric, befriended by his employer, Creese, the owner of Creese's Corner Diner, begins to train again, coming back stronger than before. Eric goes on to compete in the next Olympiad and cracks a Neo Nazi organization in the process.

Animal action is mild. In one scene Creese is seen riding a horse in the woods. A Nazi leaps out of the bushes and shoots Creese, causing him to fall from his horse. This scene was shot in cuts with the sound of the gunshot being augmented in post production. Other animal action involved a scene with Eric riding his horse during the Pentathlon where his horse jumpes a small hurdle. This was a trained jumping horse. A guard dog on a leash is also seen walking with a guard.