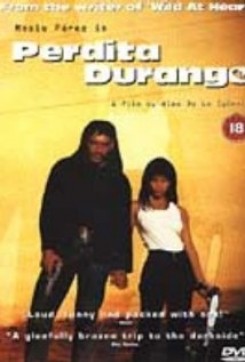 Perdita Durango is the name of the lead character who falls in love with a dangerous thief, killer and sorcerer. Together, they kidnap two teenagers, practice the black magical art of Santa Ria and engage in a series of criminal activities.

The film opens with a dream sequence where Perdita is asleep on a bed of satin sheets. A jaguar walks into the room, climbs toward the bed and pulls the sheet off of her. She awakes and screams into the face of the cat who is bearing his teeth. For this scene, the exotic cat walked A to B following the hand and voice commands of the trainer. The jaguar was also filmed against a blue screen with its mouth wide open. In post production the faces of the cat and the actress were superimposed into the same frame. In a later scene, the ritual of Santa Ria is being performed. A goat is seen in a pen and there are carcasses of dead animals hanging from the rafters. Later, one of the kidnapped teenagers knocks over a cage containing a live rabbit in an attempt to escape her captors. This production was filmed in Mexico and the U.S.A.. American Humane Association was not present for the filming in Mexico.