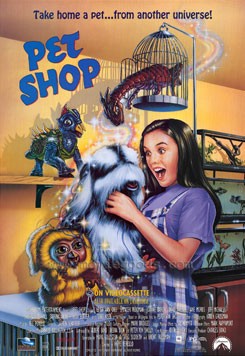 After "Joey" testifies against Tony Marino, a big time Mafia Chief from Brooklyn, he and his family are forced to move to a witness protection program in Cactus Flats, Arizona.

In the town of Cactus Flats, there is a pet shop which has just recently been purchased by a couple of aliens from another planet disguised as human beings. They identify themselves as Mr. and Mrs. Zimm. Along with many unusual items they have brought with them, Mr. and Mrs. Zimm also bring four furry mechanical critters who are capable of transforming into live animals, such as a dog, an iguana, a rabbit and a turtle. After a few days, Mr. and Mrs. Zimm have a Grand Opening celebration with a variety of new and unusual animals. The children are all fascinated with the new owners and their array of new pets. What no one suspects, is that the purpose of this grand opening is to size up the children of Cactus Flats with whom they will return to their planet, as pets.

Although animal action is throughout the entire film, it is mild. In the beginning of the film, the pet shop is owned by Barney, a gentle man who loves the animals. One evening, Barney lets two dogs out of their cages. It is inferred that Barney eventually lets all of the animals out of their cages to roam freely and play together while still in the store. However, we only see Barney pick up the first dog and then the second and put them on the floor. We can also hear the sounds of different types of birds in the background. The furry little mechanical critters transform into their animal selves several times during the film. During the Grand Opening at the pet shop, a small pony stands in the middle of the shop where the children can look at him. The trainer had positioned the pony on his mark and told him to stay. The pony was very docile and comfortable in the surroundings in the pet shop. Also in this scene we see a large snake which is caged, several different types of birds in cages, tropical fish in tanks, and some turtles in aquariums. Four of the pre-teen children fall in love with various pets, which all happen to be transformed critters taking the form of a puppy, a rabbit, an iguana and a turtle. Mr. Zimm promises each of these children that he will give them these pets if they come back later that evening after the shop is closed. Later that evening, we see an establishing shot of the front of the pet shop with puppies playing in the window waiting for someone to adopt them.

Dena, Joey's pre-teen-age daughter plays catch with her new puppy who's name is Gyzel. Because Gyzel can't catch a ball as a puppy, he transforms back to the furry critter who shoots his head up like a cherry picker crane and catches the high, fast ball. Dena is shocked, but thrilled to see such an unusual pet with two different identities. When Dena's brother, Charley comes out to see how Dena and the puppy are doing, Dena hides the critter behind her back, who, during the transformation, playfully falls out of her arms and rolls on his back and plays as Dena picks him up. This scene was shot in cuts . A handler was standing by to catch the puppy who was not harmed in any way.

Voobub is the name of the rabbit Nicky adopts. While he is in the bathtub, Nicky throws a towel over the rabbit to hide him, who then transforms back to a critter. Nicky is as thrilled and surprised as Dena was. Pwing is the iguana's name and Alexis is just as thrilled when, after dressing her pet up in one of her latest fashions, it transforms. The trainer placed loose clothing on the iguana which caused it no discomfort.

Mike, the other pre-teen, had been after Barney, the former owner of the pet shop, to bring some turtles in for quite some time, so needless to say, he was thrilled just having his own turtle, at no charge! He was happy with the box turtle named Trimblekorn, mainly because his older sister was terrified of it. That night while his sister bathed, he placed the turtle outside the bathroom door. Upon seeing the turtle, she screamed and the turtle transforms, but not before she slams the bathroom door. For this scene, the turtle was merely placed in the hall in front of the bathroom door. The turtle was not present when Mike's sister screamed.

To accomplish the transformation of the critters to live animals, they were first filmed as live animals against a blue screen background. Then the critters were filmed separately. During post production they were matted together and computerized.

The four children get together with their pets as the critters. The critters are all very tired, with no energy. Dena remembers Mr. Zimm saying that if they started to get tired, to bring them back to the pet shop for some vitamins. When they return to the pet shop, Mr. and Mrs. Zimm immediately trap the kids into cages. The critters have all gotten their vitamins, but once the children are captured, the "critters" lose all their energy once again. Dena coaxes them to get the keys and help her get out.

In the meantime, two goons of Tony Marino's come to town to kill Joey. Having seen him run into the pet shop, they both run in, and instead of the children, the goons are beamed up to the spaceship and sent to the other planet. With all this commotion going on, the critters manage to help the children to escape, and then transformed back to live animals. The puppy and the rabbit run out the front door and wait under a parked car for the rest of them. This scene was filmed in cuts. While one handler held them, another handler lured them with food so they would run A to B. For the scene under the car, the handlers simply placed the puppy and the rabbit on their marks while they waited out of camera range. They had been trained together and were very comfortable with each other. Once they are all safe, the critters/pets return to their respective owners. They find that they can survive by simply eating dirt, which was the vitamins the Zimms fed them.