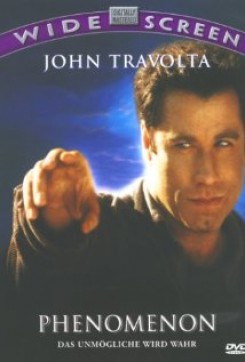 Phenomenon is a film about George Malley, a man who was born and raised in a small town in northern California. On George's thirty-seventh birthday the locals threw him a party at the Elk Horn Bar. That evening seemed like any other ordinary night in town until George walked outside and looked up into the sky. What he saw was a bright light in the night sky that literally knocked him to the ground. When he went inside to inquire if anyone else had heard or seen anything, everyone said they had not, but after George described what he had seen and what had happened to him, everyone immediately assumed that he had seen a UFO.

The next day strange things started happening to George. He could not sleep at night and he could speak fluent Spanish. He started reading two to three books a day, and could move objects with his mind. The local doctor became concerned and had him come in for a check-up. After getting the results back, George finds out that he has a tumor on his brain. Tumors usually deteriorate the brain cells, but in his case it has accelerated the brain cells which explains the sudden intelligence he has acquired. When the government finds out about this phenomenon, they ask for George's permission to do open brain surgery on him. The only problem is, they want to do it while he is still alive, which would inevitably cause his death to come sooner than if he did not have the surgery. When he refuses, the government doctors get a court order to claim that he is mentally incompetent. Therefore, they can legally keep him in the hospital. George decides that he wants to die peacefully with his loved ones, so he escapes from the hospital and spends his last remaining days with Lace, his girlfriend, and her children.

When George is introduced in the film, he is seen sitting on his front porch with his dog, Attila. In one scene, George and Attila are dancing in the hall outside his bedroom. Attila is standing on his hind legs and George is holding his front paws as the two dance back and forth. Then later, George is again seen with his arms around the upper half of Attila's body dancing. When the dog is seen sitting on the front porch, the trainer merely placed the dog on his mark and used verbal and hand commands to cue him to stay. For the dancing scenes, the actor merely picked up his front paws and they danced.

There are several scenes where Attila is seen sitting or lying on the floor or porch at George's house while he is reading or working on one of his latest inventions. He is also seen at Lace's house running out of the front door when George arrives from the hospital. In one scene, Attila is seen running out of the door of George's house and jumping up on the window of a visitor's car window. For the scenes of the dog lying or sitting on the floor or porch, the trainer merely placed the dog on his mark and used verbal commands to cue him. When he is seen jumping up on the car, trainer #1 placed the dog on his mark and cued him to walk to the car while trainer #2 cued the dog from inside the car to jump up on the vehicle.

Other animal action consists of a rabbit seen eating lettuce in George's garden and then hopping out of the open gate. The trainer had released the rabbit and used a buzzer to cue the rabbit. In the beginning scene some cows are seen standing in a field in the background. There is also a scene where George is seen feeding some pigs in their pens.