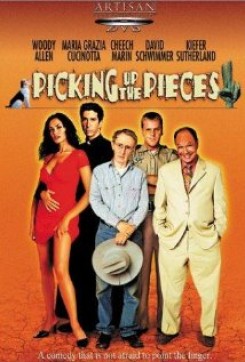 Picking Up the Pieces

In this comedy, a man murders his wife and buries the body in a small Mexican town. A blind woman finds one of the victim's severed hands and suddenly she is given sight. The woman brings the hand to the local church. People come from all over to have the severed hand perform miracles.

Let's Give A Big Hand To The Pooch named "Pinky."

Pogo and Arnold were the two Fox Terriers that shared the role of Pinky in this film. Two trainers as well as a veterinarian were on the set at all times. In the beginning of the film we see Pinky driving in the truck with Woody Allen. They stop, get out and begin to gather severed body parts. Pinky grabs a shoe and runs back to the truck. The trainer secured the dog in the truck with a safety harness. The trainer stood just off camera and verbally cued the dog to jump out of the truck, run to the shoe, pick it up and run back. Later in the film we see Pinky run to a tree and begin to dig something up. It is a severed hand and he holds it in his mouth. One trainer placed the dog on it's mark and the other trainer, hiding behind the tree, calls the dog over and gives it a verbal command to dig up the dirt. They had practiced earlier using a dog treat, only this time a fake hand was buried in the dirt. The dog picks the hand up and holds it as the cameraman gets the shot. The fake severed hand was replaced with a dog treat after the scene was over.

There are several scenes where Pinky is shown lying on the ground or couch, or walking along side Woody Allen. The trainers would use a combination of hand signals and verbal cues and the Fox Terrier happily responded. Several close up shots of Pinky reacting to something were also shown throughout the film. These shots were filmed all in one day with the trainer using a squeaky toy to get the dog to look at the camera. They were later edited into the appropriate scenes in the movie.

A vulture is shown perched on a post, along the roadside. The trainer placed the bird on the post using a tie down to secure the bird. He stood just off camera and talked to the bird, who reacted by flapping it's wings .

During a scene in the church, a couple walk in leading a goat on a leash. The man offers the goat to the priest who takes it by the rope. The trainer handed the goat to the actor, stood off camera and retrieved the goat at the end of the scene.