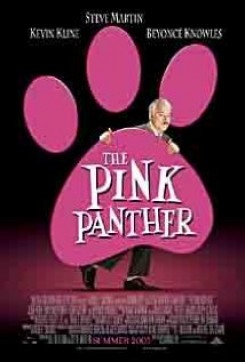 In this "prequel" to the 1963 Blake Edwards-Peter Sellers classic, the French government calls on clueless detective Jacques Clouseau to solve a murder involving a famous soccer coach and his priceless Pink Panther diamond. The list of suspects is lengthy, and inspector Clouseau and his partner, Gilbert Ponton (Jean Reno), must work overtime to crack the case and keep their boss, Chief Inspector Dreyfus (Kevin Kline), from hogging the limelight.

As Inspector Clouseau (Steve Martin) is shown to his seat in an airplane, he passes several animals, including chickens, ducks, a pig, and a goat. Ducks and chickens were placed in stacked wooden cages, and trainers positioned the pig and goat on their marks alongside human extras, who petted them as the cameras rolled. The extra holding the goat's rope also had a carrot to feed the animal. All trainers stood just off camera to retrieve the animals on cut.

The "piranhas" that attack Clouseau's arm in one scene were computer-generated (CG).

The working horse that appears in a Paris crowd was with his owner, and they took time from their job showing tourists around town to make a cameo in this scene.

Extras walking dogs on leash appear in the background in two scenes. Each time, the trainer handed over the leashes and dogs to the actors right before the camera rolled, and retrieved the dogs on cut.