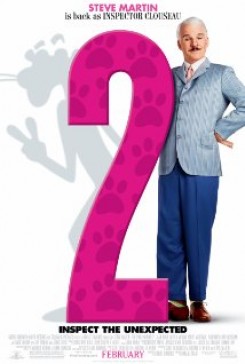 Inspector Jacques Clouseau (Steve Martin) is back! This time, he and an international team of incompetent detectives are trying to stop a thief whose specialty is stealing historic artifacts.

A bulldog named Pica played the part of Clouseau's dog. The dog is seen running into a room, lying on a chair and leaving the house with the kids. To achieve mild action like this, a trainer placed the dog on its mark and then used a combination of hand signals and verbal cues to get the dog to go with the actors or to stay. The actors were introduced to the dog ahead of time and were instructed on its proper handling. The set was closed and checked ahead of time to make sure all was safe. Filming took place on a closed set with only necessary cast and crew.

Inspector Clouseau breaks a coffee table. The dog, who is lying on a chair nearby, jumps up in reaction to the noise. In another scene, Clouseau and his kids practice karate in the living room, and break a lamp and a table. The dog, who is lying on the chair, jumps up again to see what is happening. The dog was well-rehearsed to tolerate the fighting and the noise of the prop tables and lamp breaking. The props were kept a safe distance from the dog. A trainer put the dog on the chair and stood just off-camera, using hand signals and verbal cues to get the dog to stay, then jump up. The actors were instructed to stay away from the dog, who was kept a safe distance from them during their well-choreographed fight moves.

A man rides a horse down a driveway as Inspector Clouseau's car stops in front of them. The actor on the horse was instructed on handling the horse and mounted it right before filming began. The grounds were checked ahead of time and the car was added in later, in post-production.

Seen on a security monitor, Clouseau opens the door to a barn and a few horses run out, knocking him down and trampling him. Trainers led the horses to a specially made building with a U-shaped corral behind it. In front of the door, a dummy was set up with monofilament lines attached to small wooden stakes secured into the ground. Trainers led horses by halters or lead ropes to the corral and held them. Once the wrangler opened the door, the horses were released and cued to run through the building and out the door, hitting the lightweight dummy. This scene was very well-rehearsed. Wranglers with feed buckets waited to retrieve the horses. The grounds were checked for safety beforehand. The entire area was fenced in so the horses could not run off.