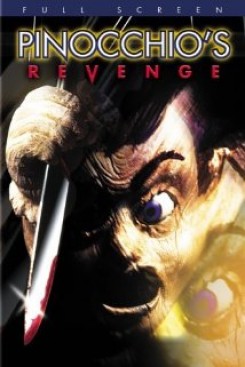 Pinocchio Syndrome is the chilling tale of how a puppet takes over an entire family's life. Reminiscent of the Chuckie series of horror movies, but based on the classic story of the puppet, Pinocchio, this evil interpretation of the puppet goes to any lengths to become a real boy. Unfortunately, the child he becomes is actually a living monster! Jennifer is a Public Defender who has just recently been divorced. She has a daughter, Zoe, who has not adjusted well to her parents' separation and goes to weekly therapy. Jennifer's job is very demanding and takes much of her time, so she has a live-in nanny, Sophia, to help with Zoe. Zoe seems to love Sophia, and has even taken well to Jennifer's new boyfriend, David. Jennifer is currently involved in a case in which she is defending a man who has been accused of killing his own son after bludgeoning to death several other youths. The man was caught burying his son's body in one grave, while burying a wooden puppet in another. The man insists that he did these horrible deeds, but Jennifer is just not convinced that this man is a murderer. None the less, the man is convicted, receives the death sentence, and is electrocuted. Jennifer is very saddened and disappointed that she could not save this man, but knows she has done her best. After the execution, she goes back to her office to begin clearing her desk of all the evidence regarding the case, including the wooden puppet. It is getting late and it is Zoe's seventh birthday, so Jennifer leaves the rest of her work for the following day. She drives home, picking up the last of the party needs and rushes into the house to prepare for the arrival of the children. Both David and Sophia are already there and David, seeing how rushed and frazzled Jennifer is, insists on helping to get the rest of the things out of the car while Jennifer gets dressed. The party is in full swing with lots of happy children when Jennifer realizes that the wooden puppet from her murder case is amongst Zoe's presents. David approaches Jennifer and apologizes for not being able to get the puppet wrapped before Zoe spied it and immediately fell in love. Jennifer assumes that one of her co-worker's had played a practical joke on her by putting the puppet in her car and lets this slide for the time being. In the next few days, Zoe and the puppet she has named Pinocchino become inseparable. Jennifer needs to return the puppet to evidence, but Zoe will not let her take Pinocchio. Unusual accidents begin to happen. A bully at Zoe's school is mysteriously run over by a bus. David, while looking in the basement for Pinocchio at Zoe's request, is slammed down the stairs and rushed to the hospital, where later the plug of his breathing apparatus is pulled out by someone unseen, causing his death. Then, Sophia is attacked and killed in Jennifer's home. We see through Zoe that it is Pinocchio who is doing all of these hideous acts...or is it? According to Zoe's therapist it is not Pinocchio, but actually Zoe. In a climactic ending, Jennifer herself is attacked by this unknown assailant.

Animal action was limited to two scenes, both involving a cricket. In the first scene, Zoe has gone to the garden to fetch a cricket to become Pinocchio's conscious. She is out in the garden holding a box when Sophia approaches her and asks what is in the box. Zoe removes the lid to reveal a cricket amongst some leaves. For this scene, a live cricket was merely placed in the box and filmed. Once the scene was completed, the cricket was released into a nearby wooded area. Later, as more and more evil things are happening, Zoe, suspecting Pinocchio as the culprit, runs to her room to check on the cricket, only this time when the lid is removed from the box, we see a dead cricket inside. In both of these scenes, crickets, one live and one dead, were purchased by the props department from a bait and tackle shop.