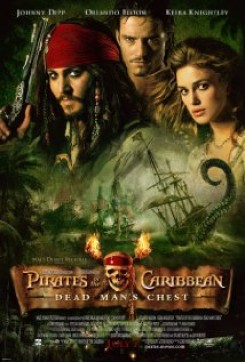 In this second installment of the "Pirates" franchise, Captain Jack Sparrow (Johnny Depp) leads another outrageous high-seas adventure as he attempts to dodge a blood debt owed to Davy Jones and his mutant, water-logged comrades. Putting their wedding plans on hold, Will Turner (Orlando Bloom) and Elizabeth Swann (Keira Knightley) rush to help their friend on a whirlwind voyage that takes them from Cannibal Island to the debaucheries of Tortuga Port.

In the opening sequence, a rowboat loaded with men and one white horse appears near the shore with larger vessels anchored in the background. The next shot shows the horse jumping onto the beach and riding along a formation of "Redcoats" from the British army. Part of this action was filmed against a blue screen. A trainer rode the horse onto the boat, which had been equipped with special ramps that provided comfortable access. For safety reasons, all rowers were trainers or stuntmen who counterbalanced the horse's weight on the vessel.

Rubber matting and slats were laid along the length of the boat to provide traction and sure footing for the horse, which stood on a planked ramp to provide the slight angle seen in the film. A seasoned stuntman jumped the horse onto the shore. For this shot, a second boat without a bow was used so that the horse could easily jump up and over the edge.

During one sequence, a raven plucks out the eye of a man confined in a metal cage while other birds peck at unidentified body parts of other prisoners. After releasing the raven, a trainer cued it to pull out a fake eye from a dummy body. Trainers had previously taught the bird this behavior, and the filmmakers liked it so much they incorporated it into the script. In order to keep things interesting for the raven, trainers had to make sure the eyeball was firmly attached and would offer some resistance when the bird grabbed it, otherwise it would lose interest in the game. Pecking done by the other birds was encouraged with bits of food tucked in strategic places.

In one scene, a raven taps its beak on the lid of a coffin floating in the water. Captain Jack Sparrow fires shots from within the coffin and the bird disappears in a cloud of feathers. Action with the live bird was filmed on a prop coffin lid against a blue screen—not over water. The real raven landed, pecked and then flew away at the trainer's cue. The special and digital effects animators then used the arching formation of the fly-away shot to create the trajectory of the burnt bird corpse and feathers left behind.

When the "Jailor Dog" sails in a small boat with two escapees, he suddenly jumps out and swims to shore, still holding the key ring in his mouth. This scene involved lots of prep work with a dog who loves water and swimming. The distance from the boat to the shore was about 15 feet, though the camera angle makes it look farther. Separate shots were filmed of the dog jumping, swimming and emerging on the beach. Production made a set of lightweight, floatable keys weighted only slightly so they wouldn't float too high on the water. Trainers on the shore retrieved the dog and immediately dried him off.

While confined inside a hanging ball-shaped cage on Cannibal Island, a prisoner grabs for a vine that turns out to be a snake. The cliff that the prisoners scale was a set piece, and the actor rehearsed the scene many times with a fake rubber snake to perfect his timing. During filming, an off-screen trainer handed the orange, black and white king snake to the actor, who held it level with his own head for a moment and then screamed and "tossed" the snake down into the trainer's waiting hands. As a precaution, crew members held up a thick furniture pad around the area to cushion the snake in case the trainer failed to catch it, which never happened.

A carriage pulled by two horses spirits Elizabeth away from jail to the port in one scene. A wrangler doubled as the actor/driver, and unseen stuntmen behind the carriage held a rope attached to the vehicle as a counterweight to alleviate the load on the horses until the road leveled off. The actress was not inside the carriage while the horses ran, which further reduced their load.

The pirate nicknamed "Cotton" (David Bailie) is seen throughout the movie with his trusty parrot on his shoulder. Two blue and gold macaws, named Chip and Salsa, were interchanged for this part, and both birds worked with the same actor in Pirates of the Caribbean: The Curse of the Black Pearl. Bailie loved the birds and spent many hours rehearsing with each of them to ensure their comfort during filming. Trainers were always just off camera, and, depending on the scene, would sometimes attach a monofilament line between the bird's leg and Bailie's costume as a lightweight tether for safety.

According to the Representative monitoring the action, the macaws treated Bailie's shoulder as a sanctuary, and the bird being filmed maintained its balance by flapping its wings as the actor moved. Special smoke and flame effects seen near the bird were minimal, kept at a safe distance, and enhanced with digital effects in post production to increase the drama factor.

Following a drunken brawl, tavern patrons toss Commodore James Norrington (Jack Davenport) into a hog pen. The actor gamely took part in this stunt, refusing to let a stunt double do the dirty work. Trainers created a spa effect of sorts by mixing warm water with the mud in the pen to relax the pigs and make them want to lie down. The squeal heard was a sound effect.

The goat lifted in ropes onto the docked ship was hauled up using a safety net designed to look like an old-style hoisting device. This apparatus was controlled at the top and bottom by trainers to eliminate any swinging, and the goat bleating was a sound effect.

In one scene, Jack offers Tia Dalma (Naomie Harris) a gift: Barbossa's "undead" capuchin monkey in a cage. Jack shoots a gun into the cage, opens the door, and the monkey climbs out unharmed. There was no real gunfire in this scene—just a silent powder puff of smoke rising vertically from the gun. Trainers prepped the monkey extensively with the puff effect and offered a tasty food treat after each take.

Near the film's end, Barbossa (Geoffrey Rush) comes down the ship's stairs and his faithful monkey jumps on his shoulder. A trainer stood off camera and cued the monkey to jump onto Rush's shoulder and then smile. Using a laser pointer aimed at the actor's cheek, the trainer verbally cued the capuchin to touch the red dot, which looks like an affectionate caress on screen.