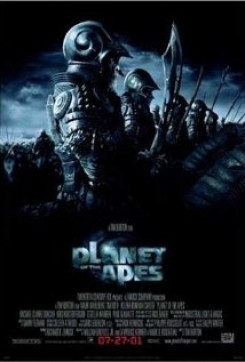 Planet of the Apes

Planet of the Apes is a revisiting of the tale told in the 1968 classic science fiction predecessor Planet of the Apes. When an astronaut, Leo (Wahlberg), takes a wrong turn in space while trying to track his chimpanzee colleague, he crash-lands on a planet inhabited by a race of intelligent and powerful apes. The apes not only rule the planet, but have enslaved humans whom they believe to be an inferior species. The evolution of the apes, their origins and ambitions are a mystery and threat to the human inhabitants. Can the stranger from space help his fellow humans overcome their fear and anger and reverse the power structure of the planet?

Human astronauts man a space station where chimpanzees are trained to operate small exploratory spacecrafts. Training sessions condition the chimps, dressed in space suits, to perform the technical operations in the delta pod under simulated situations. The chimps are rewarded with treats for successful performances and return to the research laboratory of the craft where other chimps practice skills or await their turns in cages. The astronauts in charge of the training appear to have bonded with the animals. When the station encounters an electromagnetic storm, it is decided to send one of the chimps out to staff the exploratory mission. However, when the chimp appears to be lost in the storm, his teacher, Leo, pilots off after him against the better judgment of their commander. Leo inadvertently crashes on the planet ruled by apes before he is able to locate the lost primate.

Two chimpanzees named Jacob and Jonah were used to portray the lead chimp. Trainers dressed the chimp in a specially designed space suite made of lightweight nylon with many zippers and Velcro closures. The helmet used for the chimp was only used for very brief periods particularly close-ups. For the safety and comfort of the chimps there was also a stuffy used in some scenes and a boy dressed in a chimp costume for other scenes, especially for those that required the chimp to be in the helmet for any length of time. Trainers were able to cue the chimps to perform designated actions that mimicked operating the space pod.

When chimps are seen in the lab doing tasks such as painting or the melody memory exercise, the trainers were dressed as the lab technicians and worked closely with their animals. The actors were introduced to the chimps early in the production process so that the animals would be familiar with humans other than their trainers. Trainers were always close-by to supervise and assure the animals. Leo (Mark Wahlberg) was eventually able to play "pick-a-hand" with Jacob and to walk with the chimp and hold him. One of the stunt men so bonded with the chimps while he was in his own ape costume, that the animals had to reacquaint themselves with him when he was out of make-up.

The chimps used as background animals in the lab scene are not really research animals but trained animal actors that were placed by the trainers and on the set for a very short time. The chimps that played these cadet trainees were Kenuzi, Bella, Tango, Chubbs, Ellie, BamBam, Moglee, Sam, Geri and Maggie. There was also a man in a gorilla suit. Each of the chimps excels at a particular learned behavior that was used for some of the close-ups during the lab scene. For instance, Maggie loves to spin, Sam likes to spin on his back, Jacob likes to imitate his trainer by hooting and Chubbs has a great deal of fun getting to jump around. These behaviors are taught as play for the chimps and rewarded with treats and praise.

Primates Battle Each Other:

In one of the battle scenes a chimp is seen fighting with one of the apes. The ape appears to throw the chimp against the wall of the fusilage wreckage and the animal crawls off as if injured. For this scene a great deal of preparation and choreography was planned and rehearsed. The live chimp was conditioned to swinging by a cable that was attached via a harness around the animal's body. Extensive prep time was given both chimps to get them accustomed to wearing the cable and jumping from different heights. There was padding inside the animal's space suite and the walls of the fight area were also made of padding, rubber and foam.

Chimps are much stronger and tougher than humans and often actually do throw themselves against walls and floors while playing. The power of their play behavior coupled with the padded walls and suit make it look like the chimp is thrown against the wall with great force when in fact the animal was not endangered by this stunt. For one of the takes, the chimp started with its back to the wall and then was cued to do somersaults forward while suspended from the cable. This film was later run in reverse making it appear as if the chimp slammed against the wall. The actor's armour also was made of soft neoprene that cushioned the landing when the chimp jumped onto the back of the actor. The chimp, Jonah, was prepped to crawl in a manner that made it appear to be injured with the help of a stick that was sewn into the leg of the space suit to keep the chimp's leg from bending.

During pre-production the horses were gradually conditioned to being around the actors in ape costumes. For most of the riding scenes trained stuntmen and wranglers were costumed to be members of the ape army. Some of the horses wore costume armor made of neoprene that could be folded up during the heat of the day so that the animals were never overheated. All paths were checked and cleared of rocks and debris for the running scenes to insure that the horses had safe footing. During the battle scene it appears that there is much dust in air, but this was accomplished using very fine walnut shell powder which is less harmful than actual dirt or sand. Wranglers however were particularly cautious in keeping the horses heads turned away from the wind machines during the filming of these scenes.

Trained rearing and falling horses were used for the battle sequences and were ridden by trained wranglers. There is a particular scene where a boy appears to be pinned under a horse that has reared and fallen over. For this scene a trained rearing and falling horse did a part of the action and a second horse was placed into a lay down and the boy positioned to appear as if pinned. A stunt double who was an experienced rider was substituted for the boy during the rearing and falling portion of the stunt. Plenty of wranglers and stunt riders were present to lay the horse down gently for the scene so there was no need to repeatedly fall the horse. For the fall the ground was prepared to cushion the area.

During the battle, one of the apes propels forward off the horse to dive into the rebels. To accomplish this, a cabled stuntman rode the horse and a special saddle was prepared with footholds so that the stuntman could stand for a good period of time in the ape costume on back of the moving horse prior to liftoff. The cable was attached to the stuntman by a harness and the other end to a crane that was controlled by hydraulics that could lift and propel the stuntman. Pick up riders were among the soldiers to guide the horse after the cable lifted the stuntman off its back. In another scene an actor in ape costume used a cable to launch onto the back of the horse for a dramatic mount. The cable not only allowed the actor to appear to be flying a good distance but also controlled the landing into the saddle.

The ape soldiers appear to be loping on all fours alongside the running horses as they charge into battle. To create this illusion of the apes loping past the fast paced horses, long rolls of rubber mat were attached to conveyor belts in the sand with small wheels on one end and pulled by cable attached to tractors on either end. The ape actors leapt up an down on all fours and moved forward on the belt, enabled by the device to go faster than they could on their own passing the horses running next to the conveyor belts.

Escape Across the Lake:

Leo leads his band of humans and ape sympathizers out of the city and toward the sacred ruins of ape lore. They encounter an encampment of ape soldiers and must get through these ranks before they can cross the water to safety. The apes have corralled their horses on the outskirts of the camp and the rebels steal them and make a rush for the lagoon while setting fire to the camp.

For this scene stunt riders used spring-boards for some of the dramatic mounts and also doubled as the soldiers for the moving dismounts or falls. Although the lagoon was only six feet deep in the center and the horses were primarily in three-foot deep water, floatation pads were worn by all horses when they crossed the lagoon which was heated to 70 degrees. The horses were dried, blanketed and warmed by heaters after the crossing. Divers and pick up riders were in position as a safety precaution. The lagoon was cleaned and the path for the horses was cleared of any extraneous or potentially dangerous elements underfoot. The filming was carefully planned by the wranglers and the production team to minimize the number of takes necessary to get the results. The horses were carried by barge to the set so that they could be positioned without unnecessary submersion.

For more information on Primates in Film and Television go to the AHA review of The Chimp Channel.