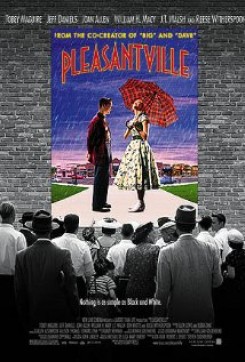 Pleasantville, as described by writer/director, Gary Ross, is "a fairytale." This dramatic comedy juxtaposes the idyllic sit-com lives of the 1950's with the more dysfunctional, yet colorful, lifestyle of the 1990's. Ultimately, the collision of the two becomes a metaphor for change, freedom and individuality.

Animals are seen only briefly in the film. In one scene, which occurs in the 1950's community of Pleasantville, firemen are seen rescuing a cat from a tree. We see the cat stranded and for the scene, the cat was carefully placed by trainers. The scene was shot in cuts with the fireman climbing a ladder and reaching into the tree. The cat is seen being held by its owner after the rescue.

In another scene, the fire truck is driving through the streets of Pleasantville with a Dalmatian riding in the front passenger seat of the truck. For this scene, the dog was placed by the trainer and given a verbal command to sit and stay. The truck traveled at a very slow pace.