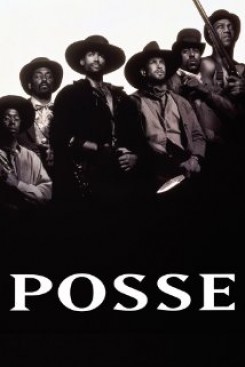 Posse is a western with revenge as its central theme. The story is told in flashback as seen through the eyes of a legendary black gunfighter and his posse of desperados. The story begins in the present as an old man sits amid western memorabilia and fading photos of black settlers and gunslingers. He wants to set the record straight on the role of the African-American in our country's western history. He then relates the story of Jessie Lee and the original posse beginning with the Spanish American War in Cuba. Jessie and a small group of black soldiers are under the command of an egocentric, sadistic bully, Colonel Graham. Graham is a white man with political ambitions who makes sure he stays safely out of harm's way as he orders his men into the front lines for the dirty and dangerous duties of war or any other tasks that will add credit to the vain colonel's record. He orders Jessie and a black unit on a particularly dangerous assignment behind enemy lines. Jessie knows that what the colonel is really sending Jessie on is a suicide mission and that his only hope for survival is to accept the assignment. He and his men not only succeed but also discover a fortune in gold coins in the Cuban camp. As they leave the enemy camp with the gold, the Colonel Graham and several of his soldiers confront the group. It seems their mission was a set-up by the colonel, who intends to shoot Jessie and his men, claiming the men were killed by enemy gunfire. Of course, he will make no mention that the gold ever existed. A battle ensues between the two sides and Jessie and his men escape with the gold, leaving the colonel for dead. They exchange the gold for cash and escape Cuba by boat, hidden in coffins. However, the colonel does not lose his life, only an eye and he is out for revenge. Wanted posters are distributed with a five hundred dollar reward placed on each of the members of "The Outlaw Posse." Graham stalks Jessie from New Orleans through the old west to a black settlement named Freemanville where it seems Jesse also has some old scores to settle.

Almost all the animal scenes involve horse action. There are several battle scenes or scenes of confrontation where horses rear or fall, or riders fall from horses. All of these scenes were performed with trained riders and/or stuntmen and trained rearing and falling horses. The ground was properly prepared for all horse falls. Our representative carefully inspected the ground for any potential hazard. Riverbeds were also inspected when horses were to ride through water. The horses were comfortable with the water. In a scene where horses appear to collide, there was never any contact between the animals. The effect was achieved with camera angles and careful timing as the horses approached each other. In all the scenes involving gunfire, only quarter loads were used and the gunfire sound was augmented in post production. There is an escape on horseback from a brothel in which there is a rider on horseback on the ground level as a man swings out of a second floor window from a rope. As he swings back and forth, he lands on the saddle of the horse with the rider and the two riders escape on one horse. Stuntmen were photo doubles for the actors and the scene was carefully rehearsed and timed. The horse and rider stood just out of camera range until the backswing when they rode into frame and the stuntman slid onto the horse. When Colonel Graham and his men arrive by railroad car in a western town, mounted riders jump out of a railroad boxcar onto the ground and ride off. To achieve this shot a ramp was built on the opposite side of the boxcar out of camera range. Although doors on both sides of the boxcar were open, only one could be seen. The riders rode their horses up the ramp , then through the boxcar, then jumped 38" onto the ground below. The ground had been prepared with very fine gravel to cushion the landing. There is a spectacular nighttime confrontation in a western town involving much gunfire and explosions. As some riders are shot and fall off their horses the horses are left riderless. Extra wranglers were provided to catch the loose horses. This climactic scene was shot in many cuts. Special effects and camera angles were skillfully used and no horse was near when the explosions occurred. There is a stunt during this scene in which a horse and rider appear to react to an explosion by jumping through a store front window and falling inside the shop. A trained falling horse and stunt rider were used for this scene and the stunt was carefully planned. The horse was really 15-20 ft. from the special effects explosion, but camera angles made it appear closer. The window was made of harmless candy glass and the frame constructed of balsa wood. The ground inside the shop had 2 ft. thick padding to cushion the fall. Rather than reacting to the explosion, the horse was responding to his rider's cues. Turkeys and other poultry are present in another store. The sounds of gunfire and explosions for that scene were augmented in post production. In other animal action a white bird is seen on the shoulder of a madam in a brothel. A doberman is on leash in a western town, and a colt is seen with horses as atmosphere in Freemanville.