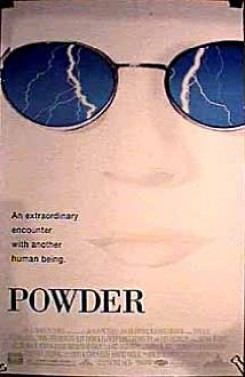 When a woman is struck by lightening and consequently dies in childbirth, the child she bears becomes a phenomenon. The child is born an albino and grows up being sequestered by his grandparents who realize that he is not only an albino, but a genius who has the ability to attract and transmit electrical current along with tremendous insight. After the death of his grandparents, Powder is taken into the custody of the state. It is there that the seventeen year-old is exposed to the world and is treated as a freak. His sensitivity and abilities also enable him to read the thoughts and feelings of both people and animals. Having taught the people of the community some great lessons, he realizes that he no longer wants to live among them. During a storm Powder runs out into a field. The energy in his body automatically attracts lightening and he is struck by a huge electrical current. He keeps running straight into the lightening bolt, preferring to become part of the greater energy of the universe.

In one scene Powder is on a camping trip with the boys from the home where the state has placed him. While out walking in the woods, Powder hears a shot and goes to investigate. Upon arriving at the scene he finds a group of boys and the local deputy standing around a deer lying on the ground. The deputy had come on the trip along with the sheriff to supervise the outing, and in the meantime decided to do a little hunting. Powder is enraged and drops down beside the animal touching his neck. At the same time the deputy grabs his hand to lift the boy up. By doing this Powder transmits the dying feelings of the animal through himself to the deputy. The deputy starts crying uncontrollably because he can feel the pain and the fright of what dying is like for this beautiful creature. When you see the actors standing around the deer after it was first shot, a taxidermied deer was used. An animatronic deer was used through out the rest of the scene. When Powder is in the woods exploring, he sees some leaves on the ground moving as if they were alive. After placing his hand under the leaves, tiny skinks come scurrying out and Powder picks one of them up in his hand marveling at the tiny creature. To accomplish the affect of the skinks moving under the leaves, an electronic device was used and then covered with leaves. A barrier was constructed around the area when the real skinks were used for the scenes where they are scurrying on top of the leaves. Three wranglers were also positioned there so that all the skinks could be retrieved after filming was complete. In yet another scene Powder is walking down a street when a dog comes up to a fence barking. Powder reaches down and rubs the sides of the dog's face to quiet him. To get the dog to bark, the trainer was off camera smacking a sleeve against the fence post. The dog was rewarded with food after the scene was completed.