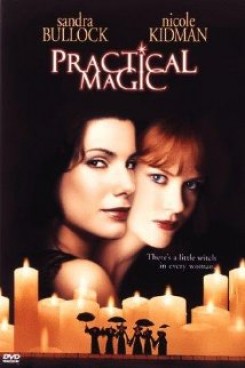 Why do animals seem to play a big part in concepts magical and/or supernatural? Perhaps because they remain such a mystery to us mere mortals. The above films delve into those realms and do use animals. Some of the images may be disturbing, but animal actors today are protected during filming by AHA Guidelines and the wonders of movie magic.

Practical Magic is a film about two sisters, Sally and Gillian, who come from a family of conjurers and who have been cursed for 100 years. The curse specifies that any man who falls in love with them is doomed to die at an early age.

What would a movie about witchcraft be without a black cat? There are several scenes throughout the film where a black cat is seen sitting on a table, hissing, lying down on a table, or being carried from point A to B by an actor.

In one scene there are three birds in a cage. Aunt Francis takes one out and first holds it in her hands. She then holds the bird's wing at the tips and the bird starts fidgeting. Aunt Jet holds out a long metal hatpin that Aunt Francis is supposed to stick into the bird. This scene was shot in cuts using a real and a fake dove. The trainer placed the bird in the actor's hand to establish the shot with the real dove. Then Aunt Jet approaches with the hatpin and proceeds to slide the pin past Aunt Francis's right hand. It appears, from the camera angle, that the pin has been pushed into the side of the bird. A fake dove was used to portray the dead bird.

In a scene where Gillian is possessed and tied to a chair, some toads are seen under the chair as it moves across the floor. A special compartment was constructed and placed beneath the chair. When the chair moved, a pulley device was activated and the toads were released. All the toads were collected safely after filming. For the scene where a little boy sits on a horse backwards, the horse was placed on its mark and the actor merely positioned on the horse to establish the shot. No riding was necessary and the actor was quickly removed. In several scenes horses and a horse and buggy are seen traveling down the street.

Movie magic enabled a frog to spit a ring out of its mouth safely. For this scene, the frog was placed on its mark and a ring was attached to a string. Before placing the ring in the frog's mouth, it was dipped in lemon juice, to deter the frog from swallowing it, and filed down so that there were no ruff edges. When the frog opened his mouth the ring was gently pulled out.

In another scene, a beetle crawled A to B across a floor and under the floorboards. The beetle was placed on its mark and the wrangler directed its path by blowing a gentle stream of air through a straw. The beetle chose to avoid the air and moved away in the opposite direction.

Other mild action included a dog seen walking down the street and a man holding a fish in his hand at a fish market.