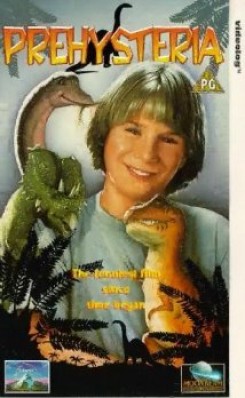 An eccentric comedy, Prehysteria takes us to a Fresno raisin farm where a widower, Frank Taylor, lives with his 12-year-old son, Jerry, 14-year-old daughter, Monica and the family dog, Ruby. Besides working his raisin farm, Frank is also an archaeologist. In fact, he has found numerous artifacts right there on his own ranch. He occasionally sells his finds to Rico Sarno, the owner of a local gift shop at the Angel City Museum. Rico is a real con-artist and is always trying to hustle Frank. But Vicki, Rico's assistant, is in love with Frank and always manages to help Frank get his money out of the swindler, Rico. In the meantime, Rico goes off to South America where he steels five large avocado-shaped eggs from a sacred tomb. He is in hopes of making a fortune with them when he returns to California. Upon his return he brings the precious eggs to the gift shop in a cooler. When Rico arrives Frank is at the shop with some more of his artifacts to sell and his and Rico's coolers are mistakenly switched. Now the excitement begins as Ruby, the dog, takes custody of the cooler and it's contents and proceeds to hatch some incredible baby dinosaurs from pre-historic time.

Ruby is seen throughout in this film playing, being petted, barking, running, riding in the Taylor's truck and generally being the family pet. In one scene Ruby jumps up onto Monica's bed and licks her toes after Monica has just finished painting her toe nails. A small amount of dog food had been placed on the actress's foot and the dog merely licked off the food. The polish on the actress's toes was not wet. In another scene Ruby picks up the cooler in her mouth and carries it out to the Taylor's pick up truck, where they depart and head for home. Once they arrive, Ruby takes the cooler down into the basement, nudges it open with her snout and removes the eggs, one at a time, and places them on a cushion. The cooler that Ruby carried was actually lightweight and empty. The eggs, which were actually made of styrofoam, were placed in the cooler just prior to the shot of Ruby removing them. To accomplish this, the dog followed hand and verbal commands given to her by her trainer with food as a reward. In a scene when Rico comes to steal back his baby dinos, he brings two hired thugs along with him. As they try to sneak into the shed where the dinos live, Ruby starts barking. One of the thugs takes a rope and ties Ruby to a tree, where she continues to bark and run around the tree. She was following verbal commands given to her by her trainer. In a closing scene Rico is about to announce his historic find. Two guards wheel out a large covered cage, supposedly housing the baby dinos. When the cover is removed we discover that it is Ruby in the cage instead, barking and wagging her tail. The dog, again, followed the verbal commands of her trainer who was out of camera range. When the cage was wheeled out, the dog was not actually in it. The dog was placed in the cage just prior to the cover being removed and was immediately released after the scene was completed.