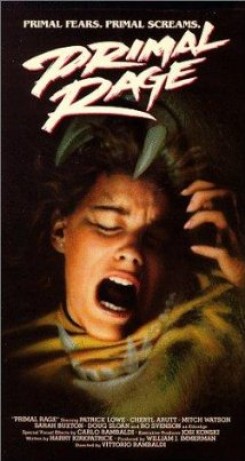 Reporters for a college newspaper become curious about the mysterious experiments being conducted by one of their professors. In his research the professor wants to find out why a baboon has had an abnormal reaction after being injected with synthetic protein. One of the students, Duffy, decides to do some investigative reporting and breaks into the laboratory at night. The baboon becomes extremely agitated while Duffy is photographing him and goes berserk, breaking out of his cage and attacking Duffy. Duffy is bitten in the attack and the baboon runs out of the laboratory. The baboon is behaving erratically when it runs into the path of a passing patrol car. The car hits the baboon and the baboon is killed when it goes through the windshield. Duffy attempts to keep his ill-fated investigation a secret, treating his bite wound and following his normal routine, but he begins to feel a little strange; he is prone to violence and possesses super strength. In a romantic tryst he bites his girlfriend and soon she also is feeling a bit ill and behaving strangely. The afflicted multiply and the violence escalates to murder with the victims meeting their end in a variety of gory ways. The climax of the film is staged during a colorful and imaginative Halloween party.

For a scene showing the baboon strapped into a laboratory chair, a chair was tailored to look like a lab chair. Velcro straps were placed around the baboon loosely so that she could get out if she wanted. She had been trained to sit still and was never tied down. In order to make the baboon behave wildly, the trainer merely stood off-camera and put his arm around a girl. (The baboon is extremely possessive of her trainer and was outraged at this). To create the illusion of the car hitting the baboon, the baboon was taught to jump on the car. The scene was shot in cuts and as the car moved slowly the baboon jumped on the hood. They then cut to another angle and, with actors in the car, put a fake baboon through a candy glass windshield.