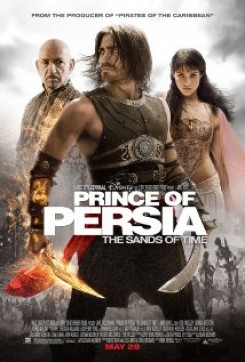 Prince of Persia: The Sands of Time

When a prince of Persia discovers that a princess' mystical dagger can turn back time, he and the princess must protect it from a corrupt leader who wishes to use it to rule the nation and possible destroy the world.

Due to unfortunate circumstances not related to filming, American Humane has given Prince of Persia a rating of Monitored: Special Circumstances.

American Humane is deeply saddened to report the unfortunate deaths of four horses and one camel filmed for this project. All of the deaths were determined to have resulted from natural causes or accidents unrelated to the production's use of the animals. With the full cooperation of the production company and Walt Disney Studios, American Humane conducted investigations into these incidents and found that each death was unpreventable. There was no indication of mistreatment or neglect. The camel suffered from a digestive problem similar to torsion or bloat, to which camels are prone. Two horses died of colic, the most common cause of premature horse death. Another horse died in a transportation accident (in the streets of Morocco, not during filming) in which the driver of the horse trailer was cut off by a reckless driver. The fourth horse died of heart failure determined to be unrelated to the action that the animal performed. Neither the filmmakers nor the animal trainers failed to comply with American Humane's Guidelines for the Safe Use of Animals in Filmed Media.

Throughout the film, mules, goats, camels, horses and other background animals are seen milling about. This mild action was achieved using one or more of the following methods: the animals were allowed to graze at liberty; they were attached to lead ropes (held by actors or tied to posts); or they had their legs hobbled with soft cotton rope. Costumed trainers were in the scenes during filming and some trainers stood just off-camera. All grounds were inspected for hazards and sets were closed and secured.

These animals were local and were accustomed to the climate and conditions. Cast and crew members were introduced to the animals and instructed on their proper handling. All horseback riders were stunt riders or actors with ample riding experience, and for fast-running horseback scenes, riders were seasoned stunt doubles. All running and fighting scenes were well-choreographed, and actors used caution while on and near the animals. Weapons were props. Any time an animal reared or lay down, this was a trained behavior. All costumes were custom-made and comfortable. The spiky head pieces, blankets and armor worn by a few of the animals were made of rubber.

Whenever animals were close to each other, they were given time to become comfortable with each other before filming began and were cued or ridden along a predetermined path. In scenes involving what appear to be hundreds of horses, there were actually several dozen, with more added in post-production. In some scenes, stunt riders rode one horse while holding the reins of another (riderless) horse and trotted, pranced and circled to create a look of chaos. Lying down or rearing was also a cued, trained behavior. For shots of animals pulling wagons or carts or wearing packs on their backs, the wagons and packs were lightweight props that the animals were accustomed to.

For desert scenes, animals were only allowed to walk or run on paths of firm sand, and for stream scenes, the water was shallow and the grounds were cleared of any potentially hazardous rocks and debris. Snow was fake, and sand storms, gusts of dust, smoke and explosions were visual effects. Horses were cued to "prance" behind a controlled fire bar; the camera angle made it look like the horses were stepping directly in the fire.

For the scene in which Dastan (Jake Gyllenhaal) jumps off a roof and onto a standing camel, then onto a second, kneeling camel (a trained behavior), a highly trained stuntman stood in for the actor and jumped a few feet onto the first camel, who had been rehearsed and whose saddle had been adjusted to keep the stuntman from accidentally harming the animal. He then jumped a very short distance onto the second camel's saddle before landing on the ground. The scene was well-choreographed and camera angles made the action look more intense than it was.

Ostrich and Other Bird Action

Lightweight (no more than 110 pounds), short-statured men were incredibly well-rehearsed for the extremely well-choreographed ostrich race scene. The birds wore harnesses on their bodies, which the riders held on to. The men mounted the birds using a special rig and holding their harnesses. Twenty ostriches were alternated in the scene. They ran slightly downhill (to help with momentum) while the men "jockeyed" the birds a short distance along a very specific path and kept them a safe distance from each other. At the end of the path, there was an enclosure filled with food and water. The area was enclosed and the gates were rigged to open at a certain time. A couple of men were cued to fall off, making sure to fall a safe distance from the birds.

During the ostrich scenes without riders, trainers funneled them through starting gates and stood in the "racetrack" area, herding them into the enclosure. The men who appeared to jump out of the way as the birds ran were stuntmen and costumed trainers.

For the scene in which several birds in cages fall off a roof, the only cages to actually fall were the ones nearest to the edge of the roof and were either empty or filled with stuffed bird props. There were real birds in cages on the roof, farther back from the ledge and secured to the roof with wire. When the actor released the empty cages to fall, the camera cut away and then showed birds on the ground below, standing outside of their cages. These birds had been placed on their marks and cued to stay, and removed right after. Several feathers were placed inside the prop-bird-filled cages right before filming and flew out when the cages fell.

All other birds seen in the film were either placed on their marks and held with tethers or were computer-generated imagery (CGI).

For the lion scene, the lioness was released from her travel cage into a larger "holding cage" enclosure, in which the action took place. Three trainers stood inside the cage and two stood outside. They used bait sticks and command words to cue the lion's walking and growling. The lion that appears to be killed was a prop.

The buck was brought to a penned-in area of the set and allowed to graze on feed that had been placed on the ground. Trainers shook a feed bucket to get the buck to look.

Both scenes were filmed against a green screen. The actors were filmed separately. The filming crew outside the lion cage was very limited, and everyone remained quiet.

All snakes in this film were CGI.