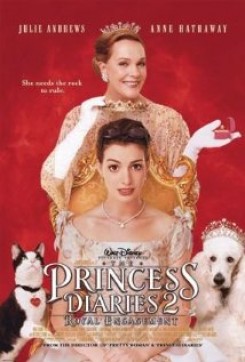 In this sequel to the 2001 box office hit, American teenager Mia Thermopolis (Hathoway) is now a high school graduate and ready to assume her duties as princess of the obscure European nation of Genovia. However, when she joins her grandmother Clarisse (Andrews) at the Royal Palace, Mia learns she must take the crown as queen earlier than expected. There is just one problem: Genovian law states that only a married princess can be coronated, so the quest for an acceptable groom is on.

Two black and white cats, Zorro and Othello, played Mia's feline friend, Fat Louie. Trainers prepped both animal actors for all scenes so they could change out each cat as needed. For shots of Fat Louie sitting, standing, or cuddling with Mia, one trainer would put the cat on mark while a second handler used verbal cues, hand signals, and buzzers to get the animal to perform the mild action or look in various directions.

Maurice, the pampered palace pooch, was played by two identical standard poodles—Gatsby and Thomas. Trainers used the aforementioned techniques for Maurice's mild scenes. Two trainers were always on set and waited just off camera to retrieve the dog at the end of each shot.

During the film's credits, Maurice "mattress surfs" down a ramp in the palace just as Mia does in a slumber party scene. To achieve this action, a costumed trainer controlled the bed's descent using a rope attached to the mattress. For the first few takes, a trainer accompanied the dog on the mattress to make sure the dog was comfortable with the action. The poodle enjoyed the ride so much that when they reached the bottom of the slide, the dog would sprint to the top to take the trip again!

The Chase is On

Maurice loves to pursue Fat Louie – two chase sequences take place in the topiary maze garden, and a third occurs in a hallway inside the palace. The trainer sprayed a light adhesive on the tile floor to provide better traction for the animals in that scene.

Each of these sequences was achieved in the same manner. One trainer released the cat with a head start and another handler stood off camera cuing the animal to run toward its mark. This same technique was repeated with the dog, and the retrieving trainers remained far apart so that each animal ran off camera in a different direction.

Baxter the cat and Gatsby the poodle were specially selected for these scenes because Baxter adores dogs and his best friend is a Labrador Retriever. Gatsby also likes cats and the two became fast friends before shooting began. When it came time to film these scenes, the animals treated it as a game instead of an aggressive act.

Before filming began, all actors received riding lessons and instructions on the proper handling of the horses. Trainers helped the actors mount their horses, and additional pickup riders waited on the periphery in case the animals gave chase—with their riders still in the saddle!

For both the processional scenes involving horses and carriages, trainers hitched the coaches immediately before filming began and the actors riding on horseback were actually wranglers. As a precaution, American Humane's Certified Animal Safety Representatives on set checked the horses' pathway for any potential hazards, and the street was closed to all vehicle traffic.

In one scene, the guard leading Mia's horse takes a rubber snake from his pocket and shows it to the animal, frightening it and causing it to run off to the topiary maze. These shots of the horse rearing and pawing the ground were filmed separately and inserted in post-production. To achieve the action, a stunt woman doubled as the actress and an off-screen trainer instructed the horse to "dance," thus creating the illusion that the horse was frightened. After the horse finished its can-can number, it was cued to run through the hedges to an awaiting trainer.

When she greets the Genovians, Mia is presented with a chicken in a basket. As she tries to take out the bird, it flaps its wings and she sets it down. Before filming began, a trainer instructed the actor how to safely handle the basket and chicken and then stood just off camera to retrieve the animal as soon as the action was completed.

In some scenes, sheep, cows, and goats appear grazing in the background. These animals were placed on their marks and trainers scattered food to keep them in one general area. Two trainers also used food cues to get the sheep to look at the actor when he ran through the flock.