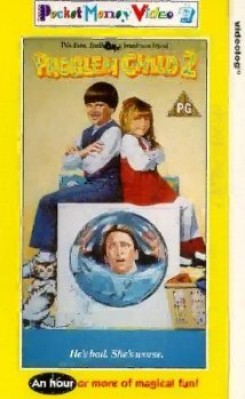 This sequel finds Ben and Junior moving and making a fresh start in a town called Mortville, where Junior meets his match in a diminutive demon named Trixie. With the ratio of women to men 100 to 1, Ben finds himself the object of much female attention. This displeases Junior, who doesn't want to share his Dad, so Junior does his darndiest to discourage each doting divorcee.

They're barely settled in their new home when Ben, Sr. arrives with his pet dog, Nippy. It seems Grandpa has suffered business reverses and needs a place to stay. Nippy dislikes Junior and displays his "sentiments" by urinating on Junior's toys. Junior in turn tries to sell Nippy, but Grandpa retrieves his pet.

When the super-rich shrew, LaWanda, schemes to make Ben husband number 7, Junior is desperate. He tries to hypnotize Nippy into becoming an attack dog who will scare LaWanda away. He fails when he puts Nippy into an irreversible trance and Nippy is immobilized. (A fake dog was used for the hypnotized Nippy.) What follows is a series of low humored events as Junior tries to scuttle his Dad's impending marriage to LaWanda.

All it takes to snap Nippy out of his trance are a few sniffs of the aroma of some irresistible dog chow. Two horses are seen briefly as part of a bridal procession. The trained horses rear on cue.

Junior deliberately sabotages a dinner prepared by LaWanda by emptying his live cockroach collection into the food. All hell breaks loose when roaches are discovered in everything, in their salad, in their dishes, and running across the table. Both Ben, Jr. and Ben, Sr. swat at the roaches and Ben, Jr. falls across the table on his backside, with roaches running in all directions, and with some roaches being smashed in the process.