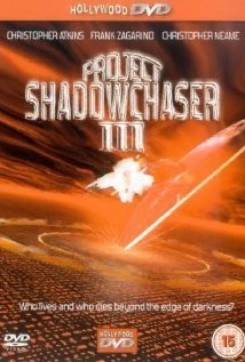 Project Shadowchaser III is a science fiction story with lots of action and a goodly amount of violence. Two spaceships are at war and the characters move from the inside of one spaceship to the other, back and forth. Something evil has taken over the bodies of some of the crew. The crew's ship has been damaged by the alien ship. There is a struggle to stop the evil takeover of the bodies of the crew members and get the ship working again so that they can return home.

Animal action in the film consists of a Jack Russel Terrier who is seen throughout running, jumping, being carried, being petted or being fed. In most of the action he is either moving A to B, or reacting to the dialogue by barking, perking up his ears, whining or growling. For this he responded to hand and voice commands from his trainer with food as a reward. In one scene, the dog is seen on top of a pin ball machine. For this scene, the trainer placed the animal on the machine and gave it a "sit and stay" command for which the dog was rewarded with food. In another scene, the dog is seen pulling on the sleeve of one of the characters. The dog had been trained prior to filming and responded to his trainer's voice commands. Near the end of the film, the dog, who is thought to have been killed earlier in the film, reappears and the dog-kisses two of the characters. The dog had been trained to give kisses, and again, merely responded to a voice command from his trainer to lick the faces of the actors.