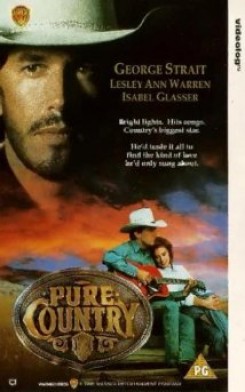 Pure Country is reminiscent of Hollywood movies of another era with a plot involving mistaken identity where boy meets girl, boy loses girl, but wins girl again before the final fade-out. All this is set against a picturesque southwestern backdrop and tuneful country music. Dusty, a country western superstar, suffers an emotional crisis during one of his flashy, overproduced, live performances in a rodeo arena packed with adoring fans. He is fed up with the glitz and after an argument with Loula, his manager, he stomps off with just the clothes on his back and his wallet. He walks into a small town barber shop and shaves off his beard and re-styles his hair. Afterwards he visits his parents' grave, then visits his grandmother, where he picks up his old guitar. After the argument Loula and the entourage travel on to Shreveport for Dusty's next scheduled performance. When Dusty doesn't show, rather than cancelling the performance, Loula substitutes Buddy, her amorous and ambitious young protege, who lip-syncs Dusty's tapes to an unsuspecting and enthusiastic crowd. Loula begins searching for Dusty before heading to Las Vegas where Dusty is scheduled for a major performance. In the meantime, Dusty gets drunk in a western night spot and gets punched out while attempting to defend a woman. The woman, Harley, takes pity on her tipsy Gallahad and brings him back to her family's ranch for a square meal. Dusty introduces himself to the family as Wyatt. He's attracted to Harley and makes a deal with her brothers to buy a horse and pay for his room and board on the debt-ridden ranch. Harley is hoping to save her ranch with the prize money she expects to win when she enters an upcoming rodeo contest in Las Vegas.

Horses are seen at various times throughout the film. They are primarily background in scenes that take place in arenas where Dusty performs and also on Harley's farm. Harley and Dusty/Wyatt gallop across a field in one picturesque scene and in another scene Harley practices riding around barrels, also on her ranch. As a prelude to the rodeo event a man on a white horse circles the arena carrying the flag while the national anthem plays in the background. There is a scene on Harley's farm where two men on horseback are roping calves. You see a lot of lassos being swung in the air and you also see calves being chased. Finally you see the horsemen lasso the back legs of a calf. You don't see the calf being brought down, but you do see the back legs being roped and tightened. In other animal action, a hen is sitting on a nest in a barn and a dog is seen briefly in two other scenes. AHA was represented by the S.P.C.A. of Texas on the set. According to them the horses were treated well, but there were concerns about the care of the cattle on the set. They were not present when the calf was roped.