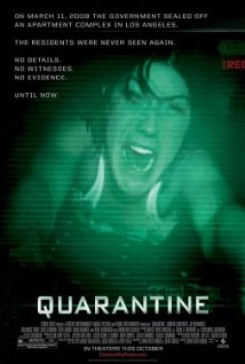 While taping a news story about a Los Angeles fire station, Angela Vidal (Jennifer Carpenter) and her cameraman follow firemen into an apartment building in response to a 911 call. Once inside the building, they discover that one of the tenants has been infected by something unknown and the building has been quarantined until the source of the infection is found.

A fireman and his Dalmatian perform a demonstration on how to get out of buildings safely using the stop, drop and roll method. An actual fireman (not an actor) and his dog were used in this scene and were accustomed to performing the action.

As the firemen enter the apartment of an infected tenant, a dog runs out into the hallway. Once the well-rehearsed actors were in the apartment, the trainer brought the dog into the room and put it on its mark. The trainer then released the dog, and another off-camera trainer in the hallway called the dog to come.

One of the tenants carries her small dog, which is wearing a sweater, around with her throughout the film. The actress was introduced to the dog and was instructed on its proper handling before filming began. The dog was accustomed to wearing the comfortably fitting sweater. In one scene the dog runs up the stairs. One trainer released the dog while another trainer at the top of the stairs called to the dog and rewarded it with a treat when it arrived.

Angela (Jennifer Carpenter) accompanies a couple back to their apartment, and a growling dog confronts them. A man exiting the nearby elevator sees the dog and walks back into the elevator, but the dog runs into the elevator and begins to attack the man as the doors close. This sequence was filmed in several separate shots and edited together in post-production. The dog was placed on its mark and told to stay. The off-camera trainer used a combination of verbal cues and hand signals to get the dog to look in various directions and to bark and growl. A costumed trainer played the role of the man in the elevator. The dog was cued to run and jump on the trainer, who then began to playfully "wrestle" with the dog, making it appear as if he were being attacked.

A man steps on a rat that is crawling on the floor and squishes it. The actor and the rat were filmed separately and edited together later. A trainer placed the rat on its mark on the floor and used a buzzer to get it to crawl in a certain direction. Then the rat was removed and the actor was brought in. The actor stepped on a custom-made prop rat filled with fake blood and guts.

While the firemen are searching the building for tenants, several cages are seen in one room of an apartment. There is a close-up of a rat inside one of the cages. Another rat sits on a table nearby. The cages were checked for safety ahead of time and the rats were placed in them right before filming began. Then a trainer placed a rat on its mark on the table and used a buzzer to get the rat to look in certain directions.