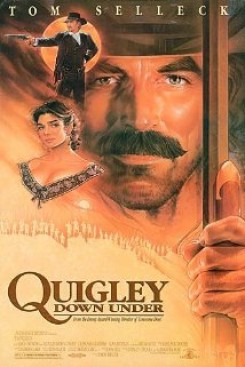 Quigley Down Under is an old fashioned western, except this time the locale is the Australian Outback. Matthew Quigley, the world's greatest long distance marksman, travels from America to Australia where he has been hired by Elliott Marston, a British land baron. Marston tells Quigley he's been hired to shoot dingos, but after Quigley arrives at Marston's remote ranch, he discovers he was really hired to kill Aborigines. When Quigley balks at this, he is beaten into unconsciousness. Cora, a young woman who tries to defend him, is also beaten, and the two are taken deep into The Outback where they are abandoned to die. As they struggle to return to civilization they must survive the brutal elements of the Australian frontier, and confront a misguided British army and an avenging Marston. Against these formidable odds their only allies are Quigley's skill with a rifle and the grateful and loyal Aborigines.

Filmed entirely in Australia, animal action is varied and sometimes violent and intense. Horses are the main means of transportation but steer are also used to pull a wagon. Kangaroo are seen in The Outback in addition to a variety of livestock on Marston's ranch. In one scene Quigley and Cora must eat grub worms to survive. The worms that went into their mouths were made of dough. When Quigley has gone for help, wild dingos attack Cora and she eventually shoots and kills them. This scene was performed by dingos that were trained in much the same way that dogs are trained. When they are seen fighting, they are actually playing and the sound track was enhanced in post production. Mud and stage blood were used as make-up for the dingos. There is some rough action involving horses with numerous horse falls. Falling horses were not only trained, but were also experienced film horses. No horses were tripped, and none were injured. When a horse goes over a cliff it is not a real horse but a mechanical one. Because no American Humane representative was present on the Australian locations all information regarding the staging of animal scenes was supplied by Alexandra Rose, producer of the film. Ms. Rose states that a veterinarian was on the set at all times when animals were used.