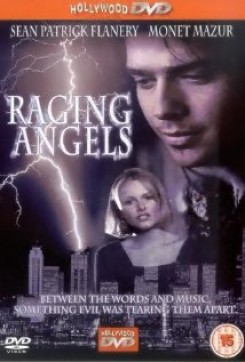 Raging Angels is a film about Chris and Lila, two young people who get involved with a cult known as, the Coalition for World Unity. Lila hears about an audition for back up singers for Colin Gramercy, a writer and singer, who is a member of the movement. The Coalition attracts many young people through Colin, as their spokesperson. What he describes is a perfect world, run with love harmony and devoid of violence. The followers don't realize that it is a cult run by the Devil himself, through his followers. One way the organization attracts followers is by sending out buses to pick up the homeless, offering them a free meal and warm lodgings. The other way is through auditions for their big rally which takes place in a few days. Lila talks Chris into going to the audition with her and she ends up getting a spot on the show. In the meantime Chris's grandmother has been having strange dreams about demons and death. Lila has been in the center of all her dreams. Therefore, she believes that Lila is in danger. Chris's grandmother doesn't like Colin and his organization. She thinks something sinister is going on in the Coalition and the danger she sees for Lila is centered around her singing for Colin. She goes to Chris and tells him about her fears for their safety but he thinks it is all nonsense. His grandmother decides to get outside help so she goes to see Sister Kate, a specialist on demons and the devil. Sister Kate agrees to meet at Chris's grandmother's house at 8:00 p.m., but before she gets there the demons come in the form of ghostly beings and chase his grandmother down the steps causing her to fall to her death. After this, Lila moves into the Coalition headquarters and Chris is denied entrance to see her. Many weird things start to happen to him, like seeing faces in the road while he is driving causing him to crash his car into a side rail. After this accident he seeks out Kate's help. When she tells him what she believes is happening, he becomes frightened for Lila's life. Kate explains that the Coalition is really out to take peoples souls and that Lila is their next victim. She has had many signs in the form of various dreams that all point to Lila and the Coalition. Kate believes that the big rally planned by the Coalition is the night Lila's soul will be taken by the Devil. The big question now is, how can Chris get inside the Coalition in order to get Lila out before the big rally?

There are many scenes with Axel, Chris's pet dog, sitting on the sofa or bed. He barks when a stranger comes in or sometimes to get Chris's attention. In one scene Chris and Lila are making love on the bed when Alex stands up on the couch whimpering, then lays back down. For all of these scenes, he was merely following voice and hand commands from his trainer. There is a scene where the demons come into Chris's apartment and things begin moving around the room. Paintings fall from the wall and objects fly through the air. The dog becomes frightened and begins barking as the commotion is going on. This scene was filmed in cuts. The dog was not actually present when these things were happening but was filmed at another time. Then in post-production the shots of the dog were inserted into the scene with the actor and background. Other animal action included sea gulls in the background at the beach.