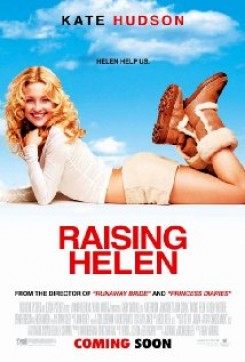 Helen Harris (Hudson) is living the life she has always dreamed of. Her career at a top Manhattan modeling agency is on the rise; she spends her days at fashion shows and her nights at the city's hottest clubs. But her carefree ways come to a screeching halt with one life-altering phone call. Helen suddenly finds herself responsible for her sister's three children, going from super hip to super mom overnight. With Dan Parker (Corbett) — a handsome young pastor and principal of the kids' new school — Helen finds some much-needed support, and she realizes the choice she has to make is between the life she's always loved and the new loves of her life.

Two red-eared sliders played the part of Henry's pet turtle Irwin. A wrangler provided and maintained the cage that Irwin lived in throughout filming, and a real turtle was used whenever the reptile was shown up close and with a cast member. A prop turtle made of clay was used for scenes where Henry runs while holding it or when the turtle appears dead.

The family pet, a dachshund named Origami, is seen in the background or alongside family members throughout the film. All of the action is mild, and the actors and dog were introduced before filming began so all would be comfortable. Trainers stood off camera using a combination of hand signals and verbal cues to achieve the action.

In several scenes, people walk dogs on leashes in the background. Trainers doubled as extras and walked the dogs. There are also scenes with pigeons strutting around near the actors in the park. Trainers released the pigeons and scattered food on the ground to keep them in place. The production used banded homing pigeons for these scenes in case they decided to take flight during filming, and trainers safely retrieved all of the birds after the scene wrapped.

In one scene, Pastor Dan goes to the zoo and blesses various animals, including the sea lions, polar bears and monkeys. This scene was filmed at the actual zoo and all of the animals remained in their normal habitats. The animals were fed by zookeepers during filming in order to hold their interest. The film then cuts to a petting zoo, where some kids feed and pet the various animals. This was filmed in the petting zoo at the Central Park Zoo, and the animals were very accustomed to being around people. The actors were coached by zookeepers on the proper handling and feeding of the animals before filming began.