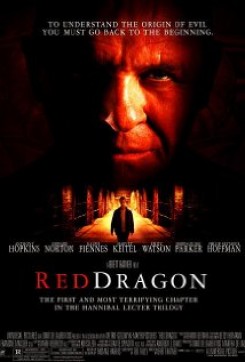 In this prequel to Silence of the Lambs, FBI agent Will Graham (Edward Norton) unwittingly discovers the "cannibal" in famed Dr. Hannibal Lecter (Anthony Hopkins) and has him locked-up for life. But when Will is later confronted with another grisly mystery, he chooses to turn to Lecter for help in solving the "tooth fairy" murders. Adding to the suspense is a massive Bengal Tiger, who appears in a tense scene with the killer himself.

Francis Dolarhyde (Ralph Fiennes) brings his blind co-worker, Reba (Emily Watson), to a veterinary clinic to touch a live tiger while it is under anesthesia. Reba approaches the large animal lying on the examining table and gently stokes its side. Animal trainers brought in two full-grown Bengal tigers for this scene. Since AHA Guidelines do not allow tranquilization for filming purposes, the fully-alert animal was trained to lie down and stay still for the scene. Two trainers stood close-by out of camera frame to visually reinforce the command. Several times, the tiger got antsy and jumped up off the table, and the trainers merely led the animal back and started again. In fact, the tiger was so alert that its normal audible breathing and purring was deemed too loud and had to be removed in post production. A fake stuffy tiger was also used during the scene when close-ups were not required.

A small dog appears in a family home movie, playing and lounging around the house. Trainers brought a terrier named Duchess and cued her from off-camera using a combination of hand and verbal commands.