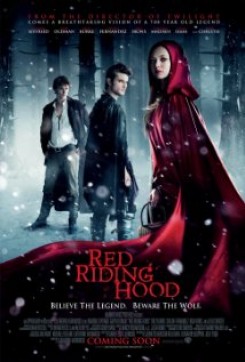 The legend of the werewolf lives on in a medieval village, where a girl must choose between love and danger.

Throughout the film, chickens were seen milling about in the background. This mild action was achieved by a trainer scattering food on the ground before placing the chickens on their marks. The goats and donkeys were allowed to graze at liberty and sometimes were attached to lead ropes held by actors. Trainers handed the actors the lead ropes right before filming began and stood off-camera to retrieve the animals afterward.

The piglet seen on a stump had a collar loosely attached with lightweight prop chains; the trainer was dressed in costume and stood behind the piglet to ensure its safety.

The brief scene in which a raven is seen perched on a pile of stone slabs was achieved by placing a monofilament tie around the bird's leg and placing the bird on top off the slabs. A trainer stood off-camera holding the other end of the tie so the bird could not fly away.

In the flashback scene where the rabbit is caught in the trap that Valerie (Amanda Seyfried) and Cesaire (Billy Burke) have set, Valerie picks up the rabbit as Cesaire places a knife to its throat. Another rabbit stands nearby and watches. This scene was filmed in separate shots. First, the rabbit was placed on its mark and was filmed hopping toward the trap. The trainer then placed the rabbit under the wooden cage and Cesaire pulled the string attached to the cage causing it to fall over the rabbit. The children were well-rehearsed with the handling of the rabbit. The knife that Valerie held up to the rabbit was a lightweight prop.

Whenever horses are seen in the film performing such action as being ridden, held by reins, or mounted and dismounted, costumed trainers or experienced actors skilled at riding, mounting and dismounting rode or surrounded the well-trained horses. All actors were given riding lessons and/or instructed on handling the horses before filming began. All running and galloping scenes were well-choreographed, and actors used caution while on the horses. For scenes in which horses pull wagons or lightweight props, such as branches and the elephant (used as a torture device), the drivers were experienced and the horses were accustomed to the pulling action. These particular horses were also accustomed to walking on snowy ground.

For the scene where Solomon (Gary Oldman), is seen on top of the horse, fighting the wolf, the horse is ridden by a stunt wrangler. He rode the horse for a short distance and cued the horse to rear. The wolf was computer-generated

For the search scene in the cave, limited cast and crew were allowed on a closed set; this was an old mining cave which is now a museum. The wolf wore a harness that had a line attached from it to the cave floor, to make sure the wolf stayed in place. The trainer stood off-camera and used hand signals to get the wolf to expose its teeth. This is the only scene where a real wolf was used; all other scenes used a computer-generated wolf.

The production provided proper documentation regarding the wolf head seen on a stick.