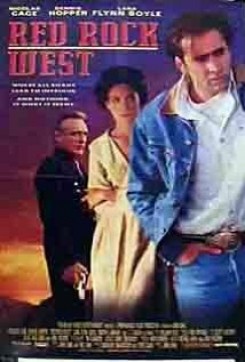 Red Rock West involves Michael Williams, an unemployed Texan, and how he mistakenly becomes involved in a murder plot when he meets up with Wayne, the owner and bartender of the Red Rock Bar. Michael, down to his last bit of change, wanders into the Red Rock Bar for a cup of coffee, hoping that he may pick up a lead on some work. Wayne, who is plotting to kill his wife, Suzanne, mistakes Michael for a man from Texas that he has hired to do the job. Michael plays along, taking the money Wayne offers him. Michael then goes out to Wayne's house to wait for Suzanne. When Suzanne arrives home she is confronted by Michael. He informs her of her husband's intentions and, with that, Suzanne doubles her husband's offer if Michael will kill Wayne instead. Michael, again, takes the money. He returns to the town of Red Rock and, with the money in hand, proceeds to write a note to the sheriff of the town informing him of the goings on between the troubled couple. He pops the letter in the mail and heads out of town, $1500 richer. It is raining when he leaves that evening. He notices a broken down truck by the side of the road and, while he is looking at the truck, a man walks out in front of his car and Michael hits the man. He takes the unconscious man back to Red Rock and rushes him to the hospital. While filling out papers to report the accident, the sheriff arrives. What a surprise it is when Michael looks up into the face of the sheriff and sees that it is none other than Wayne! Michael must now flee for his life from the double-crossed Sheriff who is bent on having his revenge.

Animal action consisted of only one scene in which Suzanne rides her horse up to her lover's trailer, where another horse is tied at the hitching post.