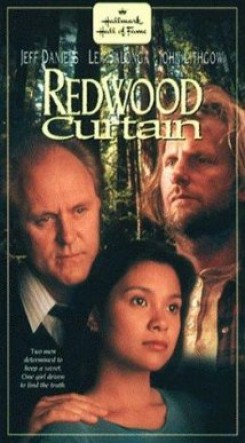 Redwood Curtain is a film about Gerri Riordian, a concert pianist. Gerri was born during the Vietnam war to a Vietnamese woman and an American soldier. Her mother knew that Gerri would be considered an outcast growing up in Vietnam, therefore she let an American couple adopt her. Laird and Julia Riordian are Gerri's adoptive parents. Gerri has been close to Laird all her life but Julia and Gerri never seemed to bond. Laird was always a heavy drinker, therefore it came as no surprise when he was found dead from a heart attack due to excessive alcohol consumption. Gerri desperately wanted to know who her real parents were and the only person who could tell her anything was dead. When Laird was alive, the only thing he told her about her real parents was that her mother owned a flower shop and her father had a blue and brown eye. After Laird's funeral, Julia finds a box in his closet with Gerri's name on it so she gives it to her. Inside the box is a photograph of three men in Vietnam. Gerri is convinced that one of the men is her real father and with only the photo and a gut instinct she goes to visit Geneva, Laird's sister, in the Redwood Forest. While there, Gerri notices a man and his dog following her around town and discovers that he is one of the war vets that lives in the forest. Gerri can't shake the feeling that this man might know something, therefore she starts following him. When she follows him into the forest he becomes very upset and tells her to leave him alone. He even goes so far as to stop at Geneva's to tell her he is not who Gerri thinks he is and shows her proof with his dog tags. Determined, Gerri continues to follow him and he finally starts to communicate with her. He tells her his name is Lyman Fellers and that he doesn't know who her father was, but when he takes his sunglasses off she knows he is lying. There before her is a man with one blue eye and one brown eye. Gerri immediately thinks that Lyman is her father, but he tells her he isn't. He did know him, however. Lyman tells Gerri how much her father loved her and that he was so proud that he had all of his buddies come to see his daughter. What she doesn't understand is that if he was so proud and loved her so much why didn't he take her with him when he left. Lyman's response is a shock to Gerri and her Aunt Geneva as he tells them that her dad did take her home with him. Gerri realizes that he is talking about Laird. She is sadden to think that he is gone now and she will never be able to tell him how wonderful it is to know that he is her real father. Later Geneva tries to explain to Gerri why she thinks that Laird never told anyone that he was her real father. The only way to bring Gerri home to the states and not hurt others he loved such as Julia, was to act like her adopted father. Gerri now knows where her roots originated and can go through life with the secure feeling of who she really is.

Lyman Fellers has a dog which appears in several scenes. The first day Gerri is in town at Geneva's she sees Fellars with his dog standing next to him as he stares at her. Later, the dog follows alongside Fellars as he enters the forest. In all other scenes of Fellars in the forest, the dog is never far behind. The dog had merely responded to hand and voice commands given by the trainer who was just off camera. Two dogs played the part of one in this movie. An older dog was used for close ups and scenes when the dog is sitting or standing. A dog, one year old, was used when you see the dog running through the forest.