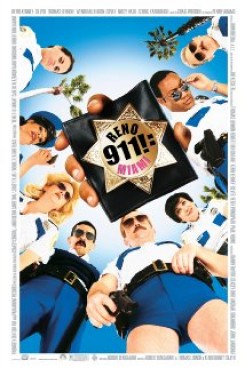 Based on the Comedy Central series, "Reno 911," this film centers around a group of Reno cops that are called in to save the day after a terrorist attack disrupts a national police convention in Miami Beach during spring break.

During one sequence, the police show up on a call about a chicken in the middle of the road, so they surround the bird and try to capture it. Animal handlers brought in eight chickens for this part

Trainers worked with the actors on how close to get to the bird and where to step. To avoid startling the chicken, the filmmakers added in the gunfire sounds during post-production. An air gun pointed at the ground created a puff of air that caused the dirt to move and the chicken to jump. Though it appeared the bird was afraid, the Certified Animal Safety Representative monitoring the scene said that in reality, it was all a game to this particular chicken. Later, the audience sees the chicken laying dead on the grass on the side of the road. The production provided documentation for the "dead" bird as well as for the fake alligators and whale used in later scenes.

In one brief scene, a woman answers her door carrying a small dog in a baby sling. This dog belonged to one of the producers and felt very comfortable with this action because it is carried in the sling all the time at home.