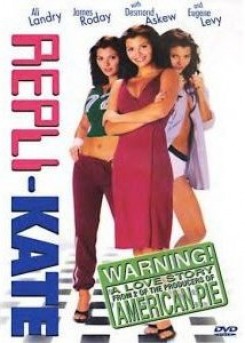 Live hamsters clone the fun in this comedy about a shy science nerd, Max (James Roday), that mistakenly replicates a beautiful reporter, Kate (Ali Landry), instead of a laboratory hamster named Fluffy. Repli-Kate wreaks havoc on Max's life—even pausing to "torture" a few of the cuddly hamsters—until he realizes his error and must reverse the damage.

Repli-Kate is not a fan of Fluffy the hamster—first she tries to eat him, then she tries to kill him off with poisoned food. But the hamster bites back—literally. Although the actress reaches into the hamster cage and handles a live one, the bite was faked using a stuffy hamster. Later, Kate tortures the hamsters by twirling them on their little wheels really fast and feeding them poisoned food. A fake hamster was used on the manically-spinning wheel, and Fluffy was not actually poisoned for filming!

A man takes two hamsters out of the steamy "Replicator" machine—they have been successfully cloned! The hamsters munched on food as they hung out on the shelf of the fake machine. The smoke was provided courtesy of two light puffs of steam.

Max holds Fluffy the hamster and pets it. Fluffy is next seen in his cage running on a wheel. Trainers advised all of the actors on how to properly handle the hamsters. Fluffy was drawn to the wheel with a peanut butter bribe that was smeared on his spinning toy.

Cloning takes its toll on poor Fluffy, sending him into a downward spiral of despair. The loopy hamster hurls himself against the walls of his cage, and is eventually seen sporting a tiny helmet. A live hamster was filmed running A to B inside of a cage, and the film was sped up to make it appear as though the hamster was going faster than he actually was. For Fluffy's slams against the walls, trainers tied a piece of wire to a fake stuffed hamster and pulled. Fluffy's small toy helmet was attached with a bit of surgical tape, although he managed to wriggle out of it on almost every take!

Fluffy sees his last when Max pricks him with a needle and he suddenly explodes. A fake hamster doubled for the live one in this intense scene.

The voyeuristic pooch that enjoyed staring at Max and Kate (and friends) was played by Chanel, a Bordeaux. Chanel achieved her action with the help of an off-camera trainer, who cued her to bark and "stay."

Many different species of animals appear in one brief sequence at the end of the film. Trainers placed the various animals, including a lion cub, hedgehog, geese, and rabbits, in their cages and supervised from off-camera. A spider monkey manages to climb on top of his cage—well, actually that's where the trainer placed him—and an actor feeds him bits of fruit.