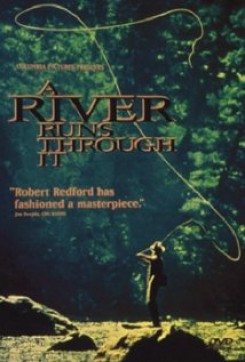 River Runs Through It, A

A River Runs Through It is a true story taken from the book written by Norman MacLean about his youth in a small town in Montana in the 1920's where he lived with his father, mother and extraverted younger brother. His family lived a simple live. His father was a stern minister of a small Presbyterian Church whose one joy in life was fly fishing, which he taught to his two young sons. Norman MacLean, who later became a professor at Chicago University, wrote his book as a "love poem to his family". The movie was shot in Montana in breathtakingly beautiful, serene countryside.

Norman MacLean, himself, was privately tutored in writing and while conservative and extremely sensitive in his own private life, he participated in some dare devil antics with his younger brother in their youth. He spent six years at Dartmouth University, while his brother stayed home and took a position with the newspaper. After he finished his college education he returned home to spend a few months with his family before taking his position with Chicago University. It is during this period that he met his wife, Jesse Burns. It is also during this time he discovered that during his absence his brother, Paul, had begun drinking and gambling heavily. He is also dating an Indian girl which was forbidden at that time. Norman had to bail Paul out of jail many times because of fights in bars and fights with his gambling companions, to whom he had become heavily indebted.

When Norman left for his job in Chicago, he asked Jesse to marry him and go with him, which she did. He also tried to persuade Paul to accompany him, but Paul, loving Montana, fly fishing and the life he was leading, declined Norman's invitation. There was one last time that Norman was called to retrieve his brother, and that was when Paul's gambling debts finally caught up with him and he was beaten to death by the butt of a revolver and dumped in an alley.

There are many fishing scenes in this movie. The fish were being handled and overseen by fish consultant, John Dietrisch, Marsall Bloom of Trout Unlimited and fish biologist, Joe Urbanny. No fish were actually caught from the river, but, instead were trucked in in specially designed trucks for transporting fish. The fish were kept in a holding pen in the river, which was made out of pipe with one inch chicken wire and nylon webbing to protect them from predators. There was also canvas or plastic on the end of the pen to protect the fish from the river current. The holding area was placed in the river in a place where there was adequate shade during the day. The trunk in which the fish were transported in was equipped with nitrogen and oxygen and a pump for circulating the water. The fish were not hooked at any time in the film with a fish hook, but instead a small hole was put in the fish's lip and mono-filament line run through. All fish had been previously sedated so that they were not in any pain. Recovery time was very quick.

In the next fishing scene you see the two brothers fishing. There's a little struggle in this fishing scene and then you see him holding the live fish in his hands. The fish were only out of the water for a few moments. Struggles with all of the fish were done by a person on the other end of the line, tugging on the line to make it appear like the fish were struggling.

When Paul catches a really big fish, it appears like there is a long, long struggle. However, much of the time you see Paul struggling and you do not see the fish. Then Paul goes under water and there is a cut to him holding up the fish. The real struggle was actually done with a gallon milk bottle full of rock.

There is one scene with a dog. Norman's future brother-in-law is bitten by the family dog at which time it appears like he slaps the dog in the head. This scene was also done in cuts with neither the bite nor the slap actually happening.