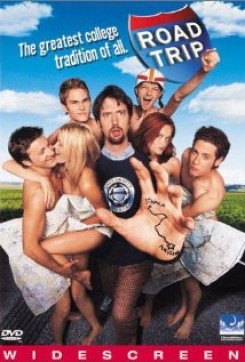 Road Trip is a comedy about a young couple who grew up together and who separate for the first time when they go to different colleges. Josh has a sexual encounter with another young woman and video tapes it. His friend, Barry, accidentally sends his girlfriend the tape. When they find out that she is out of town for the weekend, they take a road trip to her school to intercept the tape before she gets back.

Josh has a snake in a terrarium which is on a desk in his dorm room. We see a close-up of the snake as it lies inside. Barry picks up a white mouse by it's tail from inside a box and holds it above the terrarium. He then sets the mouse inside the terrarium and it crawls around by the snake. The snake doesn't react so Barry takes the mouse out of the terrarium. He holds the mouse up by it's tail and puts the mouse into his mouth, showing the snake what to do. Barry takes the mouse out of his mouth and holds it by it's tail while speaking to the snake. Two trainers stood next to the terrarium, just off camera for this entire sequence. When the actor picked up the mouse from inside the box and held it by it's tail over the terrarium, the snake inside was fake. When the mouse was set inside the terrarium the snake had a small piece of tape around it's mouth. After a few moments, the actor removed the mouse from the terrarium. The actor opened his mouth, putting the mouse on his tongue. He closes his mouth around the mouse for a moment then opened it and removed the mouse. The actor held the mouse by it's tail as he finished delivering his lines. A fake snake was used in the scene where it strikes at the actor's hand and is thrown across the room. Another man catches the fake snake and falls to the ground as the fake snake wraps around his neck. The mouse was released by it's trainer and it scurried across the floor to another train er who picked it up and rewarded it with an edible treat. There is a scene where two actors smoke a marijuana cigarette while a dog sits nearby. One actor blows some of the smoke into the dog's face. When the actor looks at the dog again, it appears to talk to him. The trainer used hand signals to get the dog to sit, lie down and stay with the actors. The actors smoked an herbal cigarette and blew a puff of smoke towards the dog. Computer graphics were used to make the dog's mouth move. Another dog that appeared in this film was at the School For The Blind. This guide dog is lying on the floor by the counter and a man feeds it a piece of licorice. The trainer verbally cued the dog to lie on it's mark. The actor fed the dog a dog treat that looked like the licorice in the jar. As the two young men travel down the highway they pass a meadow where cows are grazing. The location provided a natural background for this scene.