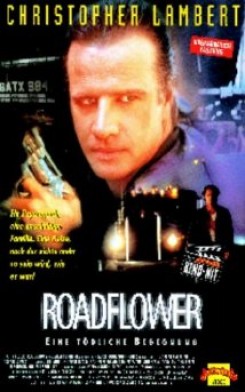 Roadflower is an action-packed drama involving four very disturbed youths who go on a killing rampage. Glen with his son, Richie, in their Mustang, and Jack with his daughter, Ashley, and his new wife, Helen, in their 4 x 4 truck, are traveling through the Southwest on their way to San Diego to meet with Richie's mom. While enroute Jack's truck overheats so all stop by the side of the road. Richie is investigating a flower growing in the middle of the road when an El Dorodo whizzes past, almost running him over. After the close call and with the truck repaired, Glen and Jack drive their families to the nearest cafe for a bite to eat. When they arrive, they meet up with the four young people who were in the car that almost ran over Richie, Cliff, the leader of the group, Red, Cliff's girlfriend, Bobby, an idiot savant, and Tom, a slightly emotionally disturbed young man. Glen confronts Cliff and a short fight ensues. After the fight is broken up, all depart. However, this disturbed gang start following and harassing Glen and Richie in their car. Glen decides to take on the gang. He makes Richie get out of the car and then proceeds to drive straight for the gang. In the process Glen's car skids off the road and crashes, where Glen burns to death in the wreckage. The gang then goes after and stops the truck in which the others are attempting to flee. Cliff beats Jack severely, leaving him for dead and takes the remaining family members hostage.

In one scene, Cliff, driving by Glen's Mustang, throws a chicken into the window of the moving car. The chicken flails around the front seat until Glen stops the car and Richie deposits the chicken out the passenger side window. This scene was shot in cuts. A fake chicken was used when the chicken was thrown into the car. A feather duster type of gadget, provided by the props department, was used to give the effect of feathers flying from the chicken in the close-up shot. The car was not actually moving when the real chicken was inside the car. The road on which this scene was filmed was closed to all traffic while filming was taking place. In another scene chickens are also seen in crates.