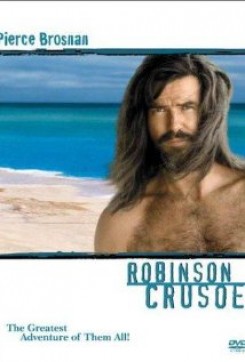 Robinson Crusoe is a film about a man named Robinson Crusoe, shipwrecked and alone on a remote island to face the rigors of survival with nature. He remains alone until the first full-moon when a band of head hunting natives from another island arrive for a ritual. When Crusoe goes to investigate, he finds the natives about to sacrifice one of their own people. Crusoe saves the native. After the head hunters leave the island, Crusoe and Friday, as he is later known, eventually become friends and together they devise a system of survival.

In the beginning of the film, carriage horses are seen in the background at a site where a duel is going to take place. Later, Crusoe is shipwrecked and when he goes back to the sinking ship he finds a small dog and rescues him. Crusoe is seen hoisting the dog over the side of the boat to safety. The dog is seen throughout the film with Crusoe on the island. He is seen running on the beach, sitting on various articles, barking, and chasing his own tail. The trainer placed the dog on his mark and cued him with verbal and hand commands. In one scene the dog chases a lit fuse as it travels towards a keg of gun powder. An explosion is heard and then Crusoe and Friday are seen having a funeral for the dog. This scene was shot in cuts. The dog is not seen during the actual explosion. Again the trainer placed the dog on his mark and cued him from point A to B. There is a scene during a storm where Crusoe is seen gathering three goats together and putting them in the shelter. The goats are seen being pulled by their horns and one being carried by the actor. After the storm, a goat is seen lying under a tree branch, supposedly dead. The trainer merely placed the goats on their mark and the actor picked them up carrying them from A to B. A fake goat and prop blood were used for the scene of the deceased goat. Other animal action consists of a tropical bird seen in the background on a perch in the shelter, on a table, on a pole, and on Crusoe's hand. Robinson Crusoe was a Foreign Production filmed in Papua, New Guinea and Scotland. American Humane was not on set to monitor the animal action. After screening the film and speaking with the trainer.