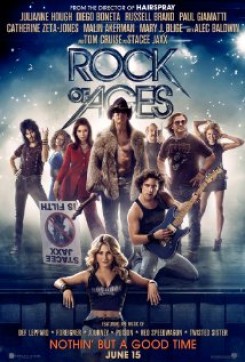 Set in 1980’s Los Angeles, a young couple chase their dream in the limelight of rock and roll.

Rock of Ages is about the excesses of rock and roll, especially in regards its main character, Stacee Jaxx (Tom Cruise), who plays the rock star of all rock stars, and has a pet baboon. This pet baboon, who’s named Hey Man in the film, is Stacee’s right hand man, trashing rooms and getting whiskey on command. Hey Man performs such actions as jumping, clapping, acting hyper or screeching. Three baboons were used to play Hey Man and trainers verbally cued the animals in an energetic tone to perform those mild actions, which they were accustomed to performing. All the animals were given plenty of interaction together, downtime, play and enrichment as well as an air conditioned trailer of their own. They were prepped with the actors so that both the humans and animals were comfortable with each other. All of the costumes that were made for the animals were custom measured to fit comfortably and be removed easily.

In the scene where Hey Man is sitting in a tree located in Stacee’s hotel room, typical of rock stars of course, production brought in a small tree in which Hey Man was able to climb and comfortably sit. Trainers stood off-screen to ensure the animal’s safety.

When Hey Man walks out of the limo, jumps onto the railing of the stairs and walks into the bar, led hand in paw by Stacee, one of the trainers was in the scene dressed as a bodyguard, making sure Hey Man’s actions where safely executed. The trainer led the baboon by attaching a cable to his waist to keep him safely balanced on the railing. In fact, in the scenes where the baboon would be with a crowd of people, several trainers were in costume to be close to the animal for safety assurance.

In the scene where Hey Man pushes the wet bar across the room to Stacee, trainers had the baboon place his hands on the cart and cued him to push it for a couple feet in each take. The big grin the baboon gives to the camera was verbally cued by the trainer asking the baboon to “smile”.

When Hey Man drinks from a whiskey bottle and drops it on the ground, the bottle was empty. In order to get the baboon to drink from the bottle, trainers cued him to sip at it, then he naturally dropped the bottle which the director loved and decided to keep in the final edit of the film.

In the scene where Hey Man appears as the culprit who destroys an entire office, the baboon picks up a bunch of items and throws them at the actor. Production provided rubber props for the baboon to throw.

In the scene where Hey Man sits on the shoulders of the bouncer, the bouncer was actually one of the trainers, so he felt comfortable sitting on his shoulders. Then he cued the baboon and it jumped off his shoulders and onto the bar. In addition, two other trainers were dressed as extras to make sure the baboon was safe.

In the scene where the couple bends down to pet a dog on a busy street, the dog was caught on camera in its natural state.

When Hey Man hits an actor in the face, he actually was trained to lightly smack people in the head, which he performed on cue. Production used a fake baboon arm to give the appearance of a hard hit to the face.