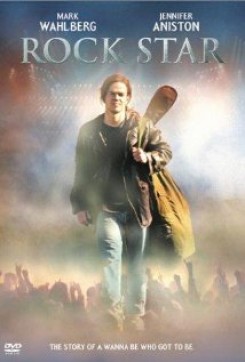 Mark Wahlberg stars as Chris Cole, lead singer of a heavy metal cover band who gets to live out his rock star fantasy when he joins the real band. Yet he soon realizes that his decadent life as a "metal god" causes suffering in other areas—namely his relationship with girlfriend and manager, Emily (Jennifer Aniston).

Unfortunately, while Chris basks in the warm glow of fame, the equally talented animal actors in the film got the ax—they ended up on the cutting room floor. Three snakes hung out in an aquarium on the Hollywood Hills set, adding to the sinister rock & roll ambience at the fictional band's not-so-humble abode. Although the snakes only appeared in the background of some shots, their cameo was cut, nonetheless. Were other cast members threatened by the snakes' evident acting charms? I guess we'll never know...

So Why Do We Mention This?

Despite the fact that the animal actors in Rock Star were relegated to possible Director's Cut DVD appearances, AHA was still on set to monitor the snake action. AHA's mission is to assure their humane care whether they appear on the silver screen or not.

The procedure AHA uses to monitor animals in film includes a lot of work for the Film and Television Unit during pre-production, filming, and post-production. The film-going public is not aware of this behind-the-scenes work. When AHA's production office first receives notice that a project is using animals, the office staff begins to compile information on the production.

If the cat is chased A to B through a room that is on fire, that's intense! AHA then discusses how this will be accomplished with the production staff, the director, and the professional animal trainer. Of course, many other factors are considered in the initial evaluation of the action such as pertinent AHA Guidelines, species, location, interaction with actors, etc.

During the course of filming, AHA's production staff monitors the work schedule for the animals and sends a trained Field Representative to the set to be there as the animals' safety representative. Very often AHA monitors pre-production training sessions as well. The Field Reports and other documentation relating to the animal actors are recorded in the production file. It is important that the Guidelines for the Safety of All Animals in Filmed Media are considered and followed.

After filming is wrapped, the film is edited and AHA screens the final cut to make sure we were aware of all the animal action in the film and to analyze how the action appears on screen. If anything looks alarming, we want to discuss it in our review. This screening plus the documentation will determine whether or not the film will receive the AHA disclaimer that states "no animal was harmed in the making of this film." AHA's post production team then writes a review and issues a rating for the film.